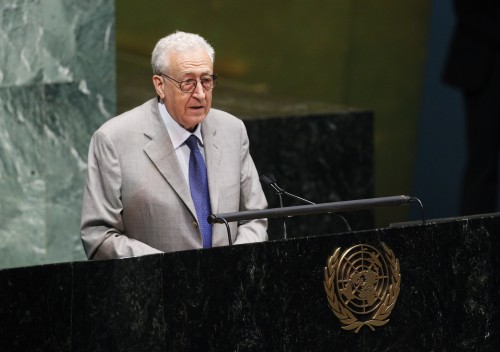 The new UN-Arab League mediator Lakhdar Brahimi called the death toll in Syria “staggering” and the destruction “catastrophic” in his first remarks to the United Nations General Assembly since replacing Kofi Annan.

“The death toll is staggering, the destruction is reaching catastrophic proportions and the suffering of the people is immense,” he said in a speech Tuesday to the 193-member assembly in New York.

Lakhdar Brahimi, who took up the role on Saturday and described his bid to broker peace a few days ago as “nearly impossible,” called for a unified approach by the international community to end the crisis in Syria.

“I am looking forward to my visit to Damascus in a few days time, and … to all the countries who are in a position to help the Syrian-led political process become a reality,” he added.

Mr. Brahimi is taking over the peace-facilitation role which has been carried out since February by former UN Secretary-General Kofi Annan who stepped down at the end of August. The former UN secretary general complained about the lack of international support shown for his six-month campaign to end the violence in Syria.

UN chief Ban Ki-moon in his address to the assembly condemned countries sending arms to Syria of contributing to further misery.

In general, United Nations and Western officials have accused Iran of sending weapons to Syria’s forces, while Damascus has accused Qatar and Saudi Arabia of arming rebels.

Meanwhile, Maurer, president of the International Committee of the Red Cross, in a 45 minute meeting with Assad on Tuesday, expressed concern over the deteriorating humanitarian situation in the country, ICRC spokesman Hisham Hassan said.

State television SANA said Assad assured Maurer that he supported the work of the Red Cross in Syria “as long as it remains impartial and independent.”

Maurer’s visit comes amid surging violence in the country where the Syrian Observatory for Human Rights claims more than 5,000 people were killed in August only.

Over 100,000 people fled the war-torn country in August to seek refuge in neighbouring states, the UN refugee agency said, the highest monthly figure since the beginning of the conflict in March 2011.