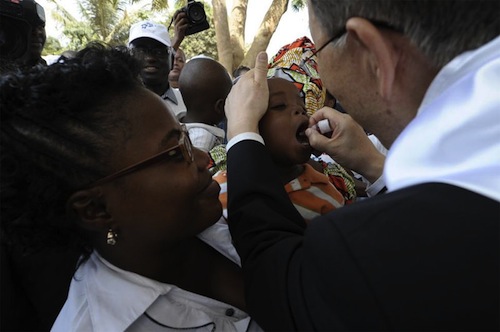 After being plagued by a re-emergence of the polio virus in 2005, Angola has not experienced any new cases of the crippling disease for a full year – moving the world a step closer to the final goal of global eradication, United Nations agencies reported.

Laboratory results have confirmed that the last case of the wild poliovirus was a 14 month old child from Uige Province in the African country’s north-west in July 2011, following years of concerted efforts by the Government and its partners to halt the outbreak, which had spread to neighbouring countries, according to a joint press release from the World Health Organization (WHO), the United Nations Children’s Fund (UNICEF) and the Government of Angola.

“This success is the result of the improvement in the quality of polio campaigns round after round,” said the acting WHO Representative in Angola, Jean-Marie Yameogo, who also credited the “high commitment” of Government officials at all levels and the engagement of civil society.

Other factors included improved surveillance of the disease, improved routine immunization and the coordination of efforts in neighbouring countries, along with greater access of populations to safe water and sanitation, according to the joint release.

Primarily funded by the Government, the country’s massive vaccination campaigns deployed thousands of health workers and volunteers door to door and at crossing points, main streets, markets and water points, reaching 95 per cent of children under the age of five.

The decline of new cases from 33 in 2010 to five in 2011, with none as yet in 2012, is significant, UNICEF’s Representative for Angola, Koenrad Vanormelingen, noted, while also warning against complacency.

“These investments demonstrate the importance of building strong primary health care for all the country’s children,” he said. “We have a duty to protect and ensure that all children are born and developed in a healthy polio-free environment, which means we can not stop until every child is fully vaccinated.”

The Global Polio Eradication Initiative – spearheaded by the WHO, UNICEF and a host of national, multilateral and private sector partners – has overseen a 99 per cent reduction of polio cases since its launch in 1988, with only three countries still endemic – Nigeria, Pakistan and Afghanistan.

Also WHO reported that no new cases of Ebola haemorrhagic fever have been reported over the past four days in Uganda, as a team of experts from the health agency and its partners continues to support the Government’s response to an outbreak in the western part of the country.

As of 8 August, a total of 23 probable and confirmed cases had been recorded, including 16 deaths, WHO stated in an update on the situation.

All people who came into contact with probable and confirmed cases of Ebola are being followed-up for a period of 21 days, the agency added, with 190 having completed 21 days of close monitoring, while 185 are still being closely monitored for any possible sign of illness.

Uganda has previously experienced outbreaks of Ebola, which can in severe cases lead to internal bleeding and is transmitted by direct contact with bodily fluids of infected persons or animals, but the most recent outbreak was declared over in early 2008.