No place for racism in sports, UN declares on International Day 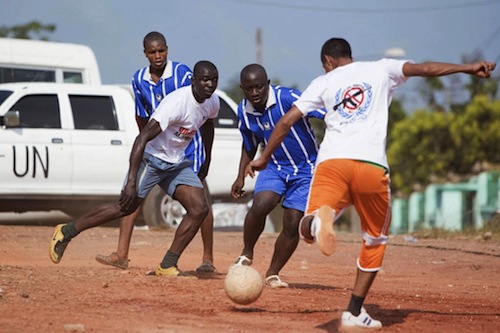 The United Nations urged using the power of sport to end the blight of racism as it marked the annual International Day for the Elimination of Racial Discrimination.

“Sport is a universal activity that can reaffirm our fundamental human rights,” Secretary-General Ban Ki-moon said in his message for the Day.

He noted that despite much progress, racism remains a pervasive menace to individuals and ethnic and religious groups worldwide, a threat to stability and a grave violation of human rights.

The Day is an opportunity to highlight the “sharp contrast between the positive values of sports and the despicable incidents of racism that scar even some professional competitions,” he noted.

“The international community has an obligation to work for equality and non-discrimination, and we can advance progress by promoting these values through sports,” Ban added.

In addition, a group of United Nations independent experts urged governments to declare zero tolerance to racism expressions and discrimination in sport.

“We call on States and sports authorities in different parts of the world to intensify the fight against racism through awareness creation, and by imposing appropriate sanctions on clubs and individuals who propagate racial hatred, abuse and violence,” said Mutuma Ruteere, the UN Special Rapporteur on contemporary forms of racism, racial discrimination, xenophobia and related intolerance.

The head of the UN Committee on the Elimination of Racial Discrimination, Alexei Avtonomov, said it is also up to local communities to counter racism when fans use racist slurs, gestures and even violence to demean and attack their opponents or players of the opposite team.

“When such an incident occurs, swift action must be taken, not only by public authorities to condemn it and to hold those responsible to account, but also by the community at large to stand in solidarity against all forms of racial discrimination,” said Avtonomov.

The Day is marked annually on 21 March on the anniversary of the 1960 Sharpeville Massacre, during which 69 unarmed demonstrators were killed when South African police opened fire on a protest against the country’s apartheid laws.

“Racial discrimination, xenophobia and stigmatisation faced in particular by people of African descent must be addressed at the community, national and international levels,” said Verene Shepherd, Chairperson-Rapporteur of the Working Group of Experts on People of African Descent.

She added that people of African descent should be recognized for their contributions not only to sports, but also to the development, diversity and richness of world civilizations and cultures.

Independent experts are appointed by the Human Rights Council to examine and report back, in an unpaid capacity, on specific human rights themes.