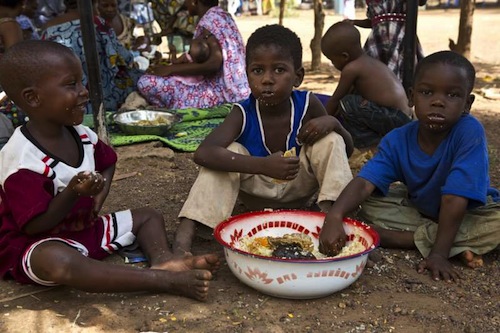 The humanitarian community is sounding the alarm on a nutrition crisis in Gao, in northern Mali, that is taking a toll on the most vulnerable and children under the age of five in particular, the United Nations Children’s Fund (UNICEF) said.

A nutrition and mortality survey carried out by Mali’s Ministry of Health and its partners, including UNICEF, found that the rate of global acute malnutrition (GAM) is 13.5 per cent making it a “serious” nutrition situation according to UN classification.

The situation is even more worrying in the Bourem health district, where the rate of GAM is 17 per cent, exceeding the emergency threshold of 15 per cent set by the World Health Organization (WHO).

During the next six months, 22,730 children will be at risk for acute malnutrition, UNICEF warned in a news release.

“The nutrition situation in Gao deserves special attention. Action must be taken now so that children who can be saved are not left to die and so that new cases can be prevented,” David Gressly, the Humanitarian Action Coordinator for Mali, said during a visit to Gao yesterday.

UNICEF pointed out that the high malnutrition rates are explained, in part, by the fact that the survey was conducted in May 2013, at the start of the hunger gap season when food supplies run out.

Also, the spike in malaria during the rainy reason has had an impact on children’s nutritional status. The negative impact of the recent conflict on populations’ financial wherewithal is another factor contributing to the severity of the situation, the agency said.

“The lives of many children are in jeopardy. They need immediate assistance,” said Françoise Ackermans, UNICEF Representative in Mali. “Treating children suffering from severe acute malnutrition is a priority for UNICEF. We are sparing no effort to assist each child suffering from malnutrition,” she added.

This year, more than 108,000 children under age five were admitted to nutrition rehabilitation units around the country with the assistance of the Government, UNICEF and humanitarian partners.

The nutrition survey will be conducted next in Timbuktu, in northern Mali, and is already underway in the south of the country. Results will allow for nutrition trends to be assessed to better evaluate needs and prioritize resource allocation.

UNICEF stated that $80 million is needed to meet nutritional needs throughout the country. To date, only a quarter of this funding has been secured. As of 22 July, the Consolidated Appeal for Mali has mobilized $142 million, 30 per cent of the $476 million sought.