Posted on: October 3rd, 2012 by AlYunaniya Staff No Comments

Syrian refugees in neighbouring countries have tripled in 3 months 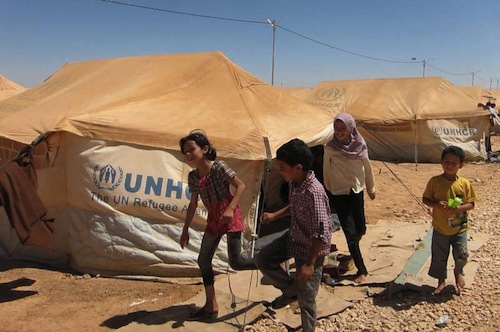 More than 300,000 Syrians have fled to neighbouring countries, the United Nations refugee agency said , with numbers tripling over the past three months. “The continuing rapid growth in refugee numbers underscores the urgency of last week’s revised Syria regional response plan seeking $487.9 million in support of up to 710,000 Syrian refugees in neighbouring countries by the end of this year,” the spokesperson for the Office of the UN High Commissioner for Refugees (UNHCR), Adrian Edwards, told reporters in Geneva.

“The generosity and hospitality shown by these countries as they struggle to cope with growing numbers of refugees make it essential that the international community provide as much support as possible,” he added. “Many refugees and the communities hosting them are already running out of resources.”

According to UNHCR, a total of 311,500 Syrians are currently registered or awaiting registration as refugees in Jordan, Lebanon, Turkey and Iraq.

Edwards warned that humanitarian agencies now face a race against time with the onset of winter temperatures across the region as many refugees are living in tents, and underscored the need to put a plan in place over the next 10 weeks.

“In Jordan, for example, where thousands are living in tents, the average low temperature between mid-November and mid-March is two degrees Celsius. A winterization plan is being developed, but it too requires support and funding,” he said.

Some 65 per cent of Syrian refugees currently receiving or seeking assistance in Jordan are in urban areas, while the remaining 35 per cent are in the new camp at Za’atri, located in the country’s north, and other smaller facilities. Since it opened just two months ago, Za’atri has received more than 30,000 people.

Edwards said UNHCR has various programmes in place to assist urban refugees in need, who are finding it increasingly difficult to live on the local economy as their resources dwindle. The programmes, which have reached more than 55,000 Syrians, include cash assistance and the provision of a package of household items ranging from kitchen sets and mattresses to sanitation items.

In Lebanon, UNHCR said it is rolling out a winterization programme along with its partners to provide refugee families and vulnerable Lebanese with fuel for heating, mattresses, blankets and clothes as well as needed refurbishment to accommodations in preparation for the colder months. However, the agency said that the scattered nature of the Syrian refugee population in Lebanon is posing challenges in providing assistance in remote areas.

In addition to the influx of Syrians in Turkey, which currently has 13 refugee camps, there has been an increase in Iraqis, Iranians and Afghans seeking protection also due to the crisis in Syria, Edwards said, adding that estimates suggest Turkey could be hosting up to 280,000 refugees by the end of the year.

In Iraq, the agency has registered an increase in the number of Syrians of Kurdish origin who have arrived in the Kurdistan region, noting that while initially many of those fleeing were single refugees, there has recently been a growing proportion of families seeking refuge.

More than 18,000 people, mostly civilians, have died since the uprising against the regime of President Bashar al-Assad began last year. A further 2.5 million Syrians urgently need humanitarian aid, according to UN estimates.