Number of Syrian refugees tops 2 million, with ‘more on the way,’ – UN 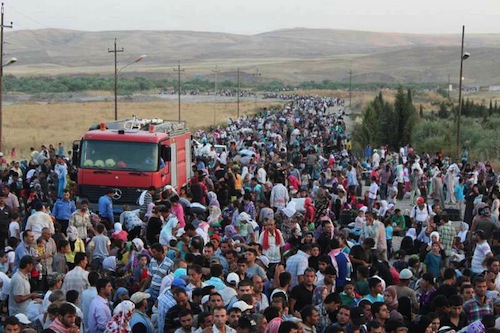 With an estimated 5,000 desperate Syrians fleeing their homes every day, the spiralling violence in the country has now created more than 2 million refugees, the United Nations refugee agency announced, adding that there is no sign the “humanitarian calamity” will end anytime soon.

“The war is now well into its third year and Syria is haemorrhaging women, children and men who cross borders often with little more than the clothes on their backs,” the Office of the UN High Commissioner for Refugees (UNHCR) said in a statement released to mark the milestone. “This trend is nothing less than alarming, representing a jump of almost 1.8 million people in 12 months.”

One year ago today, the number of Syrians registered as refugees or awaiting registration stood at about 230,670 people.

UN High Commissioner for Refugees António Guterres said Syria had become “a disgraceful humanitarian calamity with suffering and displacement unparalleled in recent history.” He added that “the only solace is the humanity shown by the neighbouring countries in welcoming and saving the lives of so many refugees.”

The refugee crisis has placed an overwhelming burden on the host countries’ infrastructures, economies and societies, and with an average of almost 5,000 Syrians fleeing into these countries every day, the need for international support has reached a critical stage.

“The world risks being dangerously complacent about the Syrian humanitarian disaster,” said UNHCR Special Envoy and renowned actress, Angelina Jolie. “The tide of human suffering unleashed by the conflict has catastrophic implications. If the situation continues to deteriorate at this rate, the number of refugees will only grow, and some neighbouring countries could be brought to the point of collapse.”

Ms. Jolie added that the world was “tragically disunited” on how to end the Syria conflict. “But there should be no disagreement over the need to alleviate human suffering, and no doubt of the world’s responsibility to do more. We have to support the millions of innocent people ripped from their homes, and increase the ability of neighbouring countries to cope with the influx.”

Ministers from Iraq, Jordan, Lebanon and Turkey meet today with UNHCR in Geneva in a bid to accelerate international support.

A further 4.2 million people are displaced inside Syria. Taken together, these numbers –amounting to more than 6 million people – mean that more Syrians are now forcibly displaced than people from any other country.

With the number of internally displaced persons (IDPs) increasing, the World Food Programme (WFP) appealed for humanitarian access inside Syria to avoid a situation in which hunger becomes an additional factor pushing more people to flee the country.

Last month, WFP was only able to dispatch food for 2.4 million people – short of its goal of feeding three million people a month – as a result of the deteriorating security situation.

The agency said it plans to further scale up its operations to reach 4 million during October, as recent assessments found that agricultural production will further decline over the next 12 months if the present conflict continues.

Meanwhile, the UN Children’s Fund (UNICEF) is supporting a major push to ensure that crisis-affected children in Syria could keep learning. Together with the Ministry of Education and the UN Relief and Works Agency for Palestine Refugees in the Near East (UNRWA), UNICEF will this month launch a home-based self-learning programme that will enable over 400,000 children in conflict areas to continue following the national curriculum.

In a briefing to reporters in Geneva, UNICEF spokesperson Marixie Mercado said there are some 1.9 million students in grades one to nine that have dropped out of school over the last academic year. Over 3,000 schools have been damaged or destroyed, and more than 930 are now being used as shelters for the displaced.

UNICEF is also building prefabricated classrooms in governorates that have been significantly damaged and is procuring school bags with stationary supplies for up to a million children in all 14 governorates. In addition, thousands of teaching-learning kits, recreations supplies and early childhood education material are being delivered.