Posted on: November 1st, 2012 by AlYunaniya Staff No Comments 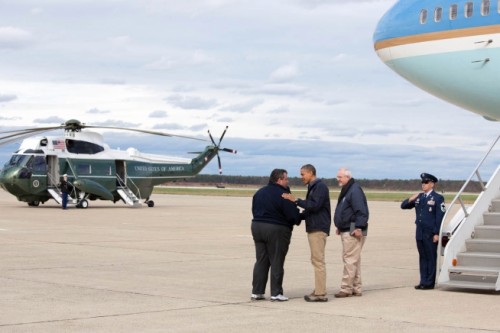 Two days after Hurricane Sandy made landfall in southern New Jersey, President Obama was on hand to witness the devastation, comfort residents, and pledge the full support of the federal government in the recovery effort, a tour that came less than a week before election day.

Obama joined New Jersey Governor Chris Christie and other officials to inspect damage from the massive storm that struck the East Coast.

Across the state, the storm damaged homes, flooded communities, and left more than 2 million people without power. According to Mayor Michael Bloomberg, Sandy killed at last 18 people in New York, while at least 64 storm-related deaths were reported nationwide to date.

“One of our challenges now is to get back to normalcy,” said Gov. Christie. “And so the things we need to do is to make sure that we get power restored as quickly as possible; make sure that people have clean drinking water, and waste water treatment plants are working; hospitals are taken care of the way they need to; and that we get kids back to school.

Christie, a supporter of Republican presidential candidate Mitt Romney, said he “can’t thank the president enough” for his concern and compassion during the storm.

President Obama outlined the steps being taken by federal emergency responders. Even before the storm hit, FEMA and other groups were able to preposition supplies like water, food, and power generators. Now more than 2,000 FEMA personnel are on the ground in the state, and the President promised that the recovery effort would continue.

“Number one, and most important, our hearts go out to the families who have lost loved ones,” he said. “For those like the people I just had the chance to meet on this block and throughout New Jersey and throughout the region whose lives have been upended, my second message is we are here for you, and we will not forget; we will follow up to make sure that you get all the help that you need until you’ve rebuilt.”

Meanwhile, Mitt Romney returned to the campaign trail Wednesday with three stops in Florida attempting to win a battleground state.

Obama’s campaign announced Wednesday he planned to resume campaign travel Thursday after a three-day pause with stops in Nevada, Colorado and Wisconsin.