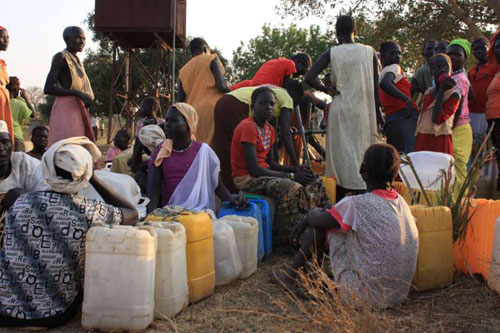 U.S. President Barack Obama late Friday appealed to North and South Sudan to end fighting and leaders of both countries to  resume negotiations to settle their conflict.

In a videotaped message released by the State Department, Obama pointed out to the people of the two countries that , “Sudan needs to halt all military actions, including aerial bombardments; give aid workers unfettered access to people in need; and end support for armed groups.”

“Similarly, South Sudan must end its support for armed groups inside Sudan and cease its military actions across the border,” he added.

He urged both sides to exercise maximum restraint and emphasized the importance of finding peaceful solutions for Sudan and South Sudan.

The appeal came after Sudan said on Friday its forces had chased South Sudanese troops out of its main oilfield as the South ordered an end to its 10-day occupation, a move which triggered fears of a wider war, AFP reported.

Border clashes between Sudan and South Sudan erupted last week with air strikes hitting the South, and Juba, the capital of SOuthern Sudan,  seizing the Heglig oil hub on April 10.

Since the invasion, production at Heglig has been shut and facilities there are leaking. Each side has blamed the other of damaging the oil infrastructure.

On Friday, Sudan’s President Omar Hassan al-Bashir said that Sudan did not want fees from South Sudanese oil and threatened to keep Sudan’s oil pipelines closed to the South’s crude exports in the wake of the worst fighting between the two countries.

“We don’t want fees from the oil of South Sudan and we will not open the pipeline,” Bashir said.

“There is no oil from South Sudan that will pass through our pure land, so that not one dollar goes to these criminals,” he added.

Sudan, meanwhile, set four conditions on Friday for “normal” relations with South Sudan, after the South ended its 10-day armed occupation of Heglig.

The Heglig violence was the worst since South Sudan won independence in July after a 1983-2005 civil war in which some two million people lost their lives.

Tensions have escalated over the disputed border and other unsettled issues.