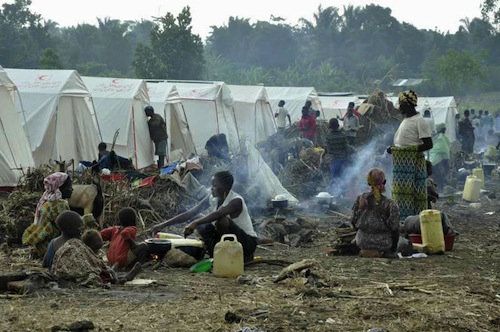 As fighting continues between Government forces and rebels in eastern Democratic Republic of the Congo (DRC), the United Nations refugee agency expressed concern for the welfare of civilians in the area, including many who have fled to Uganda.

“We remain concerned about the situation of civilians in the area of conflict,” the spokesperson for the Office of the UN High Commissioner for Refugees (UNHCR), Adrian Edwards told reporters in Geneva.

“Access to the area is not possible for humanitarian agencies, and conditions of those who do not make it across to Uganda are unclear. It takes refugees from the Kamango area around 12 hours to walk to the Ugandan border.”

Tens of thousands of refugees first began pouring into western Uganda after fighting erupted between Allied Democratic Forces (ADF), a Ugandan rebel group, and DRC national troops (FARDC) in Kamango on 11 July. The Bubukwanga transit centre, which is some 25 kilometres inland from the border, is now home to over 15,000 refugees, 60 per cent of whom are under the age of 18.

“Our site planner has now assessed that this is its maximum capacity, even though the previous estimates had indicated that it could house 25,000,” Edwards said.

“Many refugees brought their animals with them from DRC and are sleeping in their tents with their ducks and goats, increasing the risk of disease in the transit centre. The emergency response will be shifting its focus on decongesting the transit centre as of this week,” he added.

The Ugandan Office of the Prime Minister has pledged to begin electronic registration using biometrics by the end of the week so they can quickly begin moving refugees – if they wish – to the Kyangwali refugee settlement for longer term protection and assistance. There they will be given plots of land to farm, as well as basic household items, Edwards said.

UNHCR staff at Bubukwanga have also been checking for cases of sexual and gender-based violence among vulnerable people arriving in the camp. Mr. Edwards said they have found no evidence so far, but added that the agency and its partners are still considering sending experts on the issue, as well as on child protection to the camp.

Meanwhile, the agency reported that fighting between Government forces and the armed group known as M23 has continued in the North Kivu capital, Goma, with no signs of ending.

When the latest round of fighting erupted last week, some 660 civilians fled to neighbouring Rwanda and about 4,200 people sought shelter at schools and churches in Goma. There has been no sign of further mass displacement, UNHCR said.