OSCE play ‘Casa M.’ puts on stage the issue of violence against women 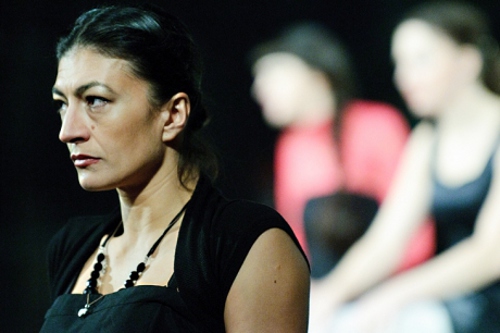 The tour of the “Casa M.”, a theatre play written and directed by Luminita Ţâcu raising awareness of violence against women, started on 3 November in Ceadar–Lunga, a town in southern Moldova.

The artistic offer was organized by the OSCE, the Organization for Security and Co-operation in Europe, Mission to Moldova in partnership with the Coliseum Art Centre.

“What we see in the play are real stories and interviews given by victims from shelters and prisons. They reflect the trauma women around the world go through every day,” said Ambassador Jennifer Brush, the Head of the OSCE Mission to Moldova. “Domestic violence should be treated as a social problem, not as a private family issue. The play is a call for action for all of us.”

The documentary-style theatre play will be performed in several towns of both sides of the Dniestr/Nistru in November. It will be staged for the first time in Bǎlti, Gagauzia and Transdniestria.

The play aims to prevent domestic violence by raising public awareness and informing people about available remedies and assistance for victims; each performance is followed by an interactive debate with the audience, when information materials are distributed.

Since 2010, the “Casa M.” project has been a part of the anti-trafficking and gender programme of the OSCE Mission to Moldova. The play has participated in international festivals in Georgia, the Russian Federation, the United Kingdom and Romania.