Over 8,000 migrants have crossed Mediterranean; first half 2013 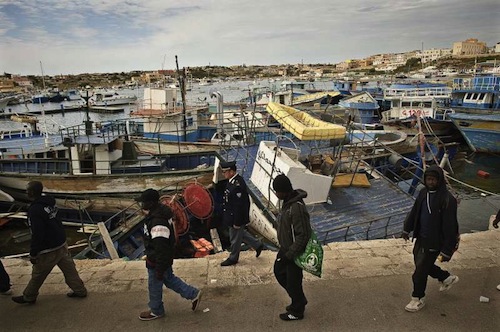 The United Nations refugee agency estimates that some 8,400 migrants and asylum-seekers landed on the coasts of Italy and Malta in the first six months of this year, most of them from North Africa, having crossed the Mediterranean, one of the busiest seaways in the world.

Around 7,800 of the migrants and asylum-seekers arrived in Italy, while Malta received around 600, according to the UN High Commissioner for Refugees (UNHCR).

Most of those making the journey departed from North Africa, principally Libya (around 6,700 people). The remaining 1,700 crossed from Greece and Turkey, landing in southern Italy.

Countries in sub-Saharan Africa are the main places of origin of these migrants and asylum-seekers, particularly Somalia and Eritrea. Other countries of origin include Egypt, Pakistan and Syria. Nationals of Gambia, Mali and Afghanistan also make these crossings, but in smaller numbers, noted UNHCR.

The agency has also recorded some 40 deaths in the first six months of 2013 by people attempting to cross the Mediterranean between North Africa and Italy.

“The Mediterranean is one of the busiest seaways in the world, as well as a dangerous sea frontier for migrants and asylum-seekers en route to southern Europe,” said UNHCR spokesperson Adrian Edwards.

“In view of the perils, UNHCR again calls on all vessels at sea to be on alert for migrants and refugees in need of rescue,” he said at a news conference in Geneva. “We also renew our call to all shipmasters in the Mediterranean to remain vigilant and to carry out their duty of rescuing vessels in distress.

“International and European law also requires States to ensure that people intercepted or rescued at sea who seek asylum can gain access to territory and to an asylum procedure where their international protection needs or claims can be examined,” he added.

UNHCR noted that the peak crossing period for migrants and asylum-seekers runs from May to September.

“At this time of year, when there is an increase in the number of people trying to make this perilous journey, it is essential to ensure that the long-established tradition of rescue at sea is upheld by all and that international maritime law is adhered to,” said Mr. Edwards.

Last year, some 15,000 migrants and asylum-seekers reached Italy and Malta by sea, while almost 500 people were reported dead or missing at sea.