Palestinian authority to help determine Arafat’s cause of death 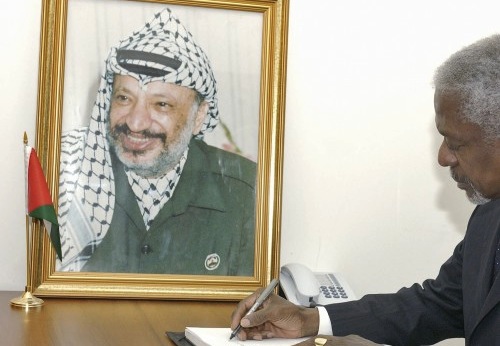 Wife of late Palestinian leader Yasser Arafat has called for his body to be exhumed from Ramallah to establish the cause of death after an elevated amount of polonium was reportedly found on his belongings.

Yasser Arafat, who died in 2004, may have lost his life as a result of polonium poisoning, according to a study ordered by Al Jazeera.

Dr Francois Bochud of the institute was quoted as saying “an unexplained, elevated amount of unsupported polonium-210″ was found on Arafat’s toothbrush and iconic kuffiya.

French doctors who treated Arafat in his final days could not identify the cause of death refusing to give details of his condition, citing privacy laws,stirring rumors and theories over the nature of his illness, according to Maan new agency.

The scientists said they needed to exhume Arafat’s body to examine his bones and the soil from the grave in order to prove he was poisoned from polonium.

Fatah’s governing body said the Palestinian leadership is ready to cooperate with all sides to determine the circumstances surrounding the death of President Yasser Arafat, after revelations prompted his widow to call for his body to be exhumed, Maan new agency reported.

Hamas, which runs the Gaza Strip, called on the Fatah-led Palestinian Authority to form a national committee to resume investigations in Arafat’s death in 2004.