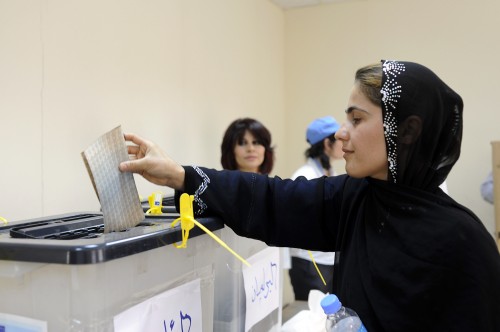 Palestinian Authority leaders on Saturday celebrated holding local elections in the West Bank for the first time since 2005, with Hamas being excluded from the elections.

Around half a million Palestinians on Saturday went to cast their vote to elect 93 municipal councils in the West Bank, according to Maan news agency. The final results are due by Oct. 23.

However, voting did not take place in the Gaza Strip, which is controlled by Hamas. Hamas boycotted Saturday’s election, saying persecution of its members would prevent a fair vote.

Palestinian Authority President Mahmoud Abbas, whose Fatah party governs the West Bank, cast his vote and said that he hoped elections in the future would take place as well in Gaza and Jerusalem “to complete our joy”.

Hamas, which took full control of Gaza in 2007 after winning parliamentary elections in 2006, is considered a terrorist organization by Israel and the U.S. East Jerusalem, which is sought by the Palestinians as the capital of any future state, is governed by Israel.

The continued divide between Hamas and Fatah worries Palestinians who fear that without Gaza’s participation the split between Palestinians will deppen and will undermine their struggle for an independent state.

According to the election commission’s statement, more than 7, 000 observers, including 130 international observers are supervising the elections, Xinhua reported. .

UN Special Coordinator for the Middle East Peace Process Robert Serry, who is visiting polling stations in Ramallah, said the vote is important and will give citizens a role in decisions that affect their lives.

The vote comes amid mounting problems for Abbas. In recent months, PA Prime Minister  Fayyad has had difficulty paying the salaries of civil servants and members of the security forces, a backbone of the small Palestinian economy, according to Maan news agency. In September, thousands of people took to the streets to protest rising food prices and delayed salary payments by the aid dependent country.