Posted on: June 27th, 2012 by AlYunaniya Staff No Comments 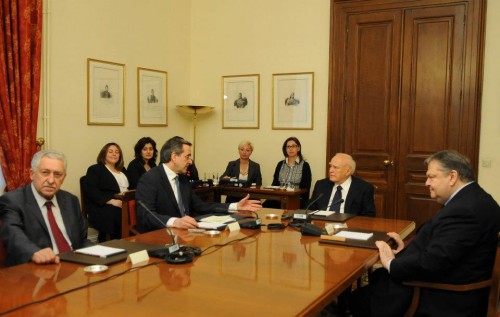 President of the Republic Karolos Papoulias is making preparations to represent the country at the EU summit Thursday and Friday. Papoulias has already met with the President of PASOK, Evangelos Venizelos, and the Ministers of Finance and Development Giorgos Zannias and Kostis Hatzidakis.

Exiting the Presidential Palace, Venizelos said he presented Mr. Papoulias his views and experiences in light of the crucial summit, since Greece’s European partners expect the President to express the country’s position after June elections.

“The country has chosen the European path and the euro will struggle to be competitive again,” Venizelos said. He added that Greece is seeking an “organized review of the loan agreement” on the basis of the agenda of the Summit, which will address the crucial topics of growth and employment, according to ANA.

Meanwhile, yesterday’s meeting of the three coalition leaders at Prime Minister Antonis Samaras’ residence ended without statements shortly before 20:30. During the meeting, Samaras, Venizelos and Kouvelis discussed the coordination of the government, the priorities in the economy, the presence of Greece in Europe after the summit and more effective way of promoting the Greek positions, according to To Vima. They had a first discussion regarding the government’s programmatic statements in parliament, and an overall prioritization of the bills that will be passed by the government.

Stournaras most recently was development minister in the caretaker government that led Greece to elections on June 17. He was chief economic adviser and aide to former Prime Minister Costas Simitis when Greece was negotiating entry to the euro, which it joined in 2001.