Papoulias proposes government of “personalities”; further talks to be held 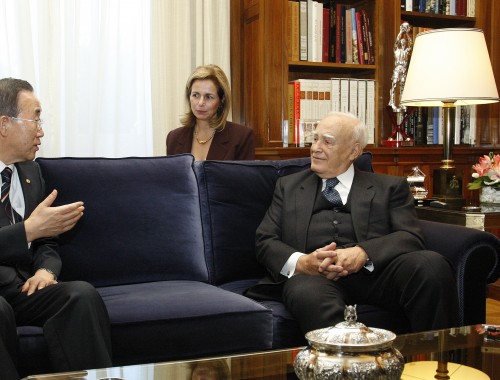 Yesterday’s meeting between the political leaders began with the President of the Republic Karolos Papoulias proposing a government of “personalities” or technocrats and would convene another meeting with the heads of more parties on Tuesday to seek support.

According to protothema.gr, ND leader Antonis Samaras agreed, stating that the “personalities” must be politicians. Evangelos Venizelos also agreed while Fotis Kouvelis once more argued that the participation of SYRIZA should be considered a condition for any further move. Thus it was agreed a new meeting to be held, involving other leftist parties.

The President of the Republic called all leaders, except Golden Dawn’s, to a new meeting today at 14:00 at the Presidential mansion with SYRIZA leader accepting the invitation.

Shortly after yesterday’s meeting, ND leader Antonis Samaras stated that he asked President Papoulias the proposal submitted by the leader of Independent Greeks Panos Kammenos be explored, which was based on a coalition government with seven priorities, ANA reported.

On his part, PASOK leader Evangelos Venizelos stated: “we support, as a last resort, a government of personalities”.  He identified a minimum government support of such an effort by ND, SYRIZA, PASOK and Democratic Left. He said that he is not optimistic and underlined that there must be a new meeting today since all parties are responsible, according to Ta Nea.

Finally, Democratic Left leader Fotis Kouvelis was the least enthusiastic about the prospect of such a government being formed, insisting that an administration made up of as many parties as possible was a better option. “This is a defeat for politics,” he said.

Meanwhile a new poll by Rass for Eleftheros Typos newspaper, showed SYRIZA to have inched forward to 20.5 percent, pushing New Democracy into second place at 19.4 percent. PASOK, which gathered 13 percent in the elections, is down to 11.8%. Independent Greeks follows with 7.8%, Democratic Left 6.2%, Communist Party (KKE) 4.8%, Chrysi Avgi (Golden Dawn) 3.8%. According to the poll, 81.4% said they want Greece to stay in the euro area. A similar percentage (80.1 percent) of SYRIZA voters thought the same.