Plan aims to save two million young lives a year from pneumonia, diarrhoea 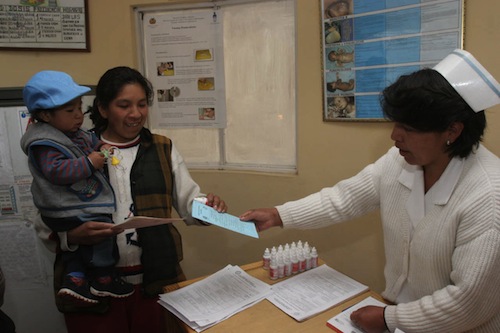 The United Nations tody launched a global plan to combat two of the leading killers of children under five, potentially saving two million youngsters each year who would otherwise die from pneumonia and diarrhoea in low- and middle-income countries.

“Too often, strategies to tackle pneumonia and diarrhoea run in parallel,” said Elizabeth Mason, Director of Maternal, Newborn, Child and Adolescent Health at the UN World Health Organization (WHO), which launched the campaign together with the UN Children’s Fund (UNICEF).

“But as countries like Bangladesh, Cambodia, Ethiopia, Malawi, Pakistan and Tanzania are already showing, it makes good health sense and good economic sense to integrate those strategies more closely,” she added of the initiative, which could reach its annual target of two million lives saved as early as 2015.

The Integrated Global Action Plan for the Prevention and Control of Pneumonia and Diarrhoea is premised on the fact that richer countries have already shown that common elements, such as good nutrition and a clean environment, are crucial in reducing infections and deaths from both diseases.

New vaccines are also being introduced to protect children from both and good access to health services and the right medicines can ensure they get the treatment they need, but existing efforts in low- and middle-income countries have yet to capitalize on these common elements.

“This is a question of equity. Poor children in low-income countries are most at risk of death from pneumonia or diarrhoea but much less likely to get the interventions they need,” said Mickey Chopra, global head of UNICEF’s health programmes. “We know what to do. If, in the 75 countries with the highest death rates, we apply to the entire population the same coverage of essential interventions enjoyed by the richest 20 per cent of households, we can prevent the deaths of two million children even as soon as 2015, the deadline for the Millennium Development Goals (MDGs).”

The MDGs, adopted at the UN Millennium Summit in 2000, seek to slash a host of social ills, including global poverty and hunger, disease, and lack of access to health and education, all by 2015.

The Action Plan sets clear goals to achieve by 2025: a 75 per cent reduction in incidence of severe pneumonia and diarrhoea from 2010 levels among children under five, and the virtual elimination of deaths from both diseases in the same age-group. It also aims for a 40 per cent reduction in the global number of children under five who are stunted.

The Action Plan’s targets are significantly higher than current levels. For example, it calls for 90 per cent of all children to have access to antibiotics for pneumonia and oral rehydration salts for diarrhoea, up from current levels of 31 and 35 per cent respectively.

As an interim target, at least half of all children under six months should be exclusively breastfed, against 2012 levels of 39 per cent. All children should have access to improved sanitation and safe drinking water, from 63 and 89 per cent respectively; and, building on the progress already made in some countries in introducing new vaccines against pneumococcal bacteria and rotavirus, it aims for 90 per cent coverage by the target date.