Posted on: May 6th, 2012 by AlYunaniya Staff No Comments

Polls open in Greece; 1 out of 3 voters undecided 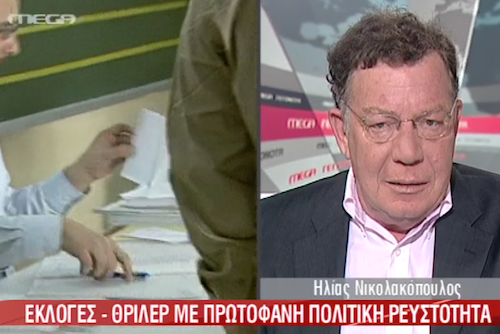 Top pollsters appearing on prime time news argued for a high percentage of undecided voters that reach 30%, a few hours before polls open across the country.

Pollster Elias Nikolakopoulos said on Mega television prime time news that the percentage of undecided voters remains high, whilst participation is expected to be less than 2009, despite the crucial nature of the national election. A joint exit poll by major opinion companies companies that will be announced at 7.00 pm will give a ± 0.5 range, except for the parties that are close to the 3% threshold. For these parties, estimations will have to wait for the final counting of the electoral outcome.

Marc polling company CEO T. Gerakis told Alpha television: “Undecided voters are more than ever… even those who have decided have not a fixed opinion regarding the political party that will eventually choose to vote. One day they say one thing and the next something else…” he said.

PASOK specialists argued yesterday that 90% of the undecided voters do not belong to the so-called anti-MoU group. They explain this as follows: “hardcore anti-MoU voters have already decided what to vote. Voters that are more neutral tend to move around until the last minute”.

ND people on the other hand argue that in the last 30 years, 70% of undecided voters in Greece tend to vote for the party that is closer to victory. “In this case”, they say, “figures show a sweeping victory for the New Democracy.” And it’s winning performance was recorded for the last time yesterday. ND leader’s staffers believe that ND’s percentage will exceed 30%. Rolling secret polling showed already a steady 28%.

Exit polls will be published at 7 pm, including officially 75% of the sample. At 8 pm a second wave will follow with 100% of the sample, and around 9:30 pm. there will be a reassessment of the election result. NET, ANT1, Alpha and Mega agreed to share the cost of an exit poll by the polling companies

The first “safe” estimate of Sunday’s election result is not expected to emerge before 11:00 pm, according to the IT firm Singular Logic, which has been assigned the job of collecting and transmitting the results of voting throughout the country. They also clarified that obtaining such a ‘safe estimate’ (with a small deviation of around 0.5%) will depend on whether they have a response from 50% of the sample in 5,000 polling stations chosen at random and representative of the 56 electoral constituencies.