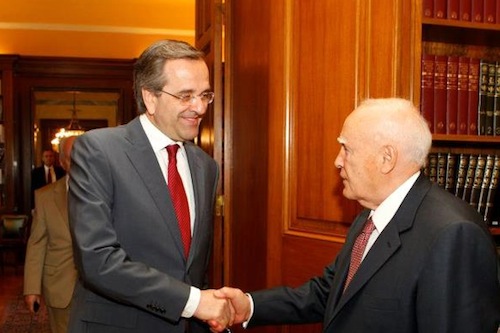 President Karolos Papoulias will lead the Greek delegation at the EU summit on Thursday instead of Foreign Minister Dimitris Avramopoulos. The reason for the change was to comply with EU regulations according to which a head of state must lead the delegation, AP writes. Prime Minister Antonis Samaras will miss the summit because of hospital treatment. Samaras left hospital yesterday with his eye bandaged. His doctors have said he must stay home to recover for several days and cannot travel.

Meanwhile, after meeting yesterday afternoon,  Evangelos Venizelos and Fotis Kouvelis – who lead the two smaller parties in the government – have stated that they will not attend the summit. According to media reports, Kouvelis said the coalition party leaders will go to Brussels to try to win concessions from European partners over a bailout package as soon as Samaras recovers from eye surgery. “We have agreed, as soon as the prime minister has recovered, to go together to Brussels… in order to negotiate and fight for everything that is related to the implementation of what has been agreed,” the Democratic Left leader told reporters, according to Kathimerini.

Meanwhile, Prime minister’s office announced that National Bank of Greece chief Vasilis Rapanos would not be assuming the position of Finance Minister. In a letter to Prime Minister Antonis Samaras, Rapanos has turned down the position of finance minister in the new coalition government, citing health reasons. “The recent incident that led me to being hospitalized indicated that my health problem has not been overcome,” Rapanos said in his letter, ANA writes. “Following discussions that I had with my doctors, I have concluded that the condition of my health, for the time being, is not what it should be in order to fulfil my duties adequately.” Samaras responded by accepting Rapanos’s decision and wishing him a quick recovery.

According to Kathimerini, Samaras is due to meet the leaders of the other two parties in his coalition government later today to discuss who could fill the role of finance minister. Since last night, the names of ND VP and former EU Commissioner Stavros Dimas and Former PASOK Minister Alekos Papadopoulos are under discussion for the job, according to the media.