Posted on: April 20th, 2013 by Tina Michalitsis No Comments

Progress made in Syrian crisis too weak – UN 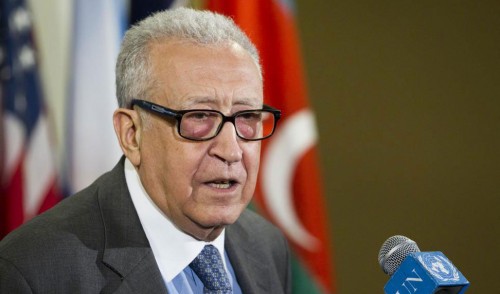 The Joint Special Representative of the United Nations and the League of Arab States on the Syrian crisis, Lakhdar Brahimi, yesterday reiterated his calls for the Security Council to act in Syria which he calls ‘the most serious crisis.’

“The situation is extremely bad and we need action from the Council,” Brahimi told reporters at UN Headquarters following a closed-door session with the Council.

Latest figures showing 6.8 million people in need, 4.25 million people internally displaced and an additional 1.3 million seeking refuge in neighbouring countries from a conflict that has killed over 70,000 people since opposition forces sought to oust President Bashar Al-Assad in 2011.

“With the Syrians, I got nowhere. With the Security Council, with the Americans and the Russians we made some progress, but it was far too weak,” said Brahimi.

“I am very happy that the Americans and the Russians are talking to one another. I’m very happy that from the discussions we just heard, the Security Council is very now aware that this is an extremely serious problem. As a matter of fact, the most serious crisis,” he continued.

“If they really believe that and they are in charge of looking at the peace and security there is no time for them to lose,” Brahimi stressed.

The Security Council heard from top United Nations officials, including Under-Secretary-General for Humanitarian Affairs Valerie Amos who said that humanitarian organizations are facing enormous and dramatically growing constraints in aiding millions of Syrians overwhelmed by the ‘human catastrophe’ that the war-torn country has become.

In response to questions from journalists yesterday afternoon, Brahimi also denied rumours that he planned to resign. “Every day I wake up, I think I should resign, but I haven’t so far,” he said.