Pushing forward dialogue, understanding and countering the appeal of terrorism 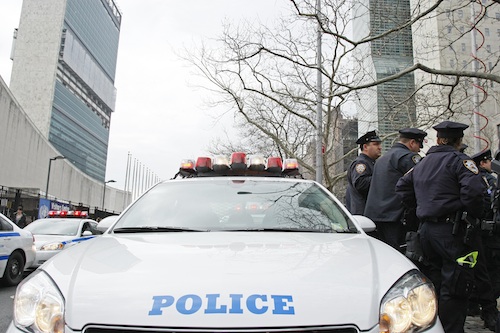 “We cannot have a ‘one size fits all’ approach,” the President of the General Assembly Abdulaziz Al-Nasser, told the Seminar on Dialogue, Understanding and Countering the Appeal of Terrorism held at UN Headquarters in New York.

“We need to develop a better and deeper understanding of how to combat intolerance, ideological factors, social marginalization and the discrimination of minority communities. These are some of the factors that lead to radicalization and by considering them we can be in a better position to identify the best policies for addressing these challenges successfully,” he added.

The seminar, organized by Assembly President Al-Nasser in partnership with the UN Inter-regional Crime and Justice Research Institute (UNICRI) and the Counter-Terrorism Implementation Task Force, seeks to give countries the opportunity to learn from existing good practices that are being used in various regional and national programmes to counter the appeal of terrorism through a series of interactive panel discussions.

Mr. Al-Nasser emphasized that the seminar was taking place at a “critical time” as the third review of the UN Global Counter-Terrorism Strategy, which was adopted by the General Assembly in 2006, would start on Thursday.

“We have the opportunity to push forward the agenda on dialogue, understanding and countering the appeal of terrorism,” Mr. Al-Nasser said.

The UN Global Counter-Terrorism Strategy underscores the need to tackle the conditions conducive to the spread of terrorism, prevent and combat terrorism, build States’ capacity to counter terrorism, and ensure respect for human rights against the backdrop of the fight against terrorism.

In his remarks to the Seminar, Secretary-General Ban Ki-moon highlighted the role of dialogue and understanding between communities and called on governments to boost their efforts to build “tolerant and resilient societies that reject the hate-filled narratives of terrorists.”

“It takes more than traditional security approaches to counter terrorism,” Mr. Ban said. “We must work together to extinguish the flames of hate and intolerance that breed terrorist violence.”

The UN chief encouraged symposium participants to explore how the mass media can contribute to peaceful exchanges of views and leverage public-private partnerships that promote understanding.

“We must spare no effort to provide all people – particularly children – with an environment where they cherish the values that bring us as humans and nourish the diversity that enriches our souls,” Ban said.