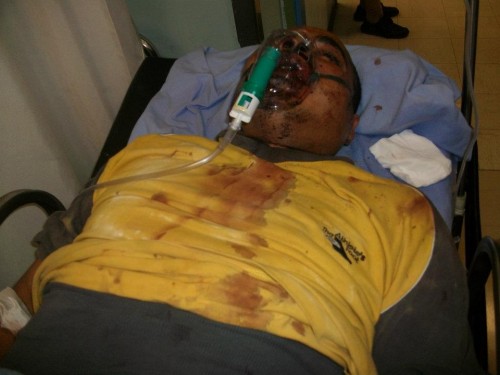 A new attack against immigrants living in a home in the industrial suburb of Perama, southwest of Piraeus took place at 3 AM in the morning Tuesday.

According to Mahmoud Abou hamed a resident of the area and responsible of the official page of the Egyptian community of Greece who took photos of the incident said 20 members of Golden Dawn including one woman attacked a house where five Egyptian fishermen lived, causing damage and injuring seriously one of them.

“They broke their cars and seconds later they entered the house and beat them using bats and other makeshift weapons catching them off guard. The four managed to escape but the one who was at that time at the roof sleeping did not have time to escape, and now he is hospitalized in serious condition. His situation is between life and death.”

The seriously injured Abu Zeid Mubarak Abu Zeid 24 years old has been transferred to Tzanio hospital but due to his serious health situation is soon expected to be transferred to Evangelismos.

According to police reports, 6 people have been arrested including a woman and are being questioned since early in the morning.

Egyptian Rabab Hassan told Alyunaniya, “This is the first time something like that happens. I’m sure the police won’t do anything to the six people they arrested. They just caught them for the eyes of the world. It seems like the situation has reached a point with no return. What else can we expect?”

Meanwhile the President of the Muslim Association of Greece Naim El Ghandour strongly condemned the racist acts and “holds all political parties accountable for giving living room to Golden Dawn to act in these racist ways and especially the Leader of New Democracy party Antonis Samaras, who should be especially sensitive to the issue since he comes from a family of Greek migrants who once lived in Egypt.”