Rain and floods to worsen cholera epidemic in West Africa 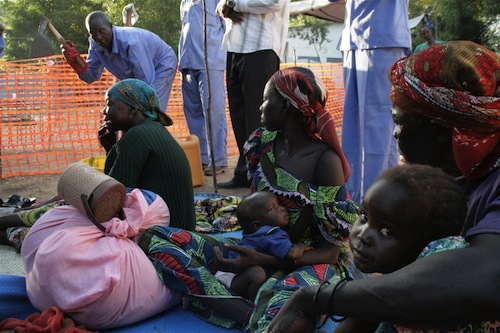 The United Nations warned that the current cholera emergency in West Africa is set to worsen as rains and floods create the conditions for the disease to spread faster and further in the region.

“Urgent action needs to be taken in critical areas to help stop the spread of this disease,” said the World Health Organization’s (WHO) Regional Director for Africa, Luis Sambo. “Governments need to declare an emergency early so as to benefit from the necessary technical and other support of partners. Just as crucial are better surveillance and cross-border collaboration between health authorities.”

In a news release, the UN Children’s Fund (UNICEF) said that 55,289 cases of cholera have been reported just this year in 15 countries in the region, which have led to 1,109 deaths.

Exceptionally heavy rains have contributed to its spread, as they flood shanty towns in urban centres, leaving many without access to latrines or a clean water supply.

WHO is currently working with governments in the affected countries to ensure an effective response, while UNICEF is supplying equipment, chlorine and medicines, the agencies said.

“Public health measures must become much more of a priority for governments,” said the Acting UNICEF Regional Director for West and Central Africa, Manuel Fontaine. “We are now seeing children and their families falling prey to a disease that is avoidable.”

Fatality rates in the region can range up to eight per cent, which WHO and UNICEF described as “unacceptably high.” These rates are also 34 per cent higher compared to the same period last year.