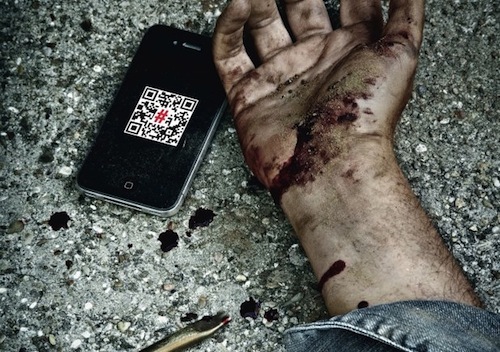 According to Reporters Without Borders, at least 38 citizen journalists and media workers have been killed by the Assad government since the start of the uprising in Syria in March last year.

Their only crime was to disseminate information and spread the truth about the bloody crackdown that is still in progress against the Syrian people. Their main weapons are mobile phones and the Internet.

To pay tribute to the unprecedented number of citizen journalists who have lost their lives to send out pictures of the uprising, Reporters Without Borders and its advertising agency JWT Paris, through a unique live Tweet, are bringing to life the experiences of people who find ways of circulating information in the midst of danger.

The campaign image shows a lifeless hand covered in earth and blood. Next to it, there is a smart phone with a QR code on its illuminated screen. When it is scanned, a Twitter-style application starts up, taking the user into the live tweet of an imaginary citizen journalist in the midst of the conflict in Homs. The application shows his final minutes in detail through his feed. Events gradually take an unexpected turn until the final outcome.

Known as #DeadTweet, the press and poster campaign uses the QR code to raise awareness about citizens’ efforts to cover conflicts in countries where authoritarian governments impose a media blackout by trying to keep out foreign journalists. When journalists can no longer do their job, these citizens are an essential information link and play their part in informing the world, sometimes paying the price with their lives.

At the end of the experience, a short awareness-raising message appears and the user can share it on social networks and help spread the message to as many people as possible.