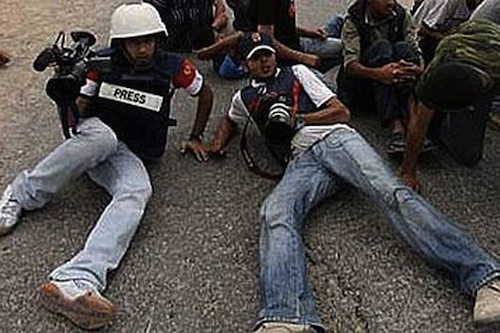 The press has come under fire from both government officials and protesters amid nationwide demonstrations in Turkey, with instances of attacks, obstruction, detention, and vandalism being reported, according to news accounts and local journalists.

The demonstrations began a week ago with a protest against the Turkish government’s plan to build a shopping mall in part of Istanbul’s Taksim Square. They spread late last week into larger nationwide demonstrations against Prime Minister Recep Tayyip Erdogan and the ruling Justice and Development Party (AKP), according to news reports. More than 1,000 have been injured in the last four days, the reports said.

“We call on Turkish police to ensure that journalists are able to cover these significant news events without being obstructed or attacked,” CPJ Europe and Central Asia Program Coordinator Nina Ognianova said. “Reporters have been caught between overzealous law enforcement and unruly crowds.”

Tugba Tekerek, correspondent for the daily Taraf, told CPJ that police tried to prevent her from taking photographs in Besiktas district in Istanbul on Sunday. She said she identified herself as a journalist to the officers. Tekerek also said several police wrested a scarf from her face, which she was using to shield herself from tear gas.

Police firing rubber bullets into a crowd in Taksim Square hit two reporters, ATV correspondent Mesut Çiftçi and cameraman Ismail Velioglu, on Sunday, the reports said. Staff at ATV told CPJ that Çiftçi was hit in the shoulder and Velioglu was hit in the hand, but neither suffered any broken bones or other trauma.

Caner Dalgıç, cameraman for the TV8 television, said protesters threw stones at him and chased him on Saturday afternoon. He told CPJ he was hit by two stones while getting out of his car to cover protests in Ankara, and sought shelter with the police.

Police detained Erhan Karadag, a bureau chief for Kanal D TV, in Ankara on Saturday night but released him the next day. Karadağ told CPJ he was arrested while carrying bottles of water and milk, which is used to soothe effects of tear gas.

Protesters also gathered in front of the studios of NTV on Monday and demonstrated against the outlet’s conservative editorial stance, according to news reports. NTV was among mainstream TV channels that had chosen to play down the anti-government protests that erupted in Istanbul and other cities. Many traditional media outlets, conscious of Erdogan’s harsh disapproval of critical coverage, opted to play down the protests, thereby incurring the discontent of demonstrators, who see them as failing to do their journalistic duty.

The offices of the pro-government Haberturk television and the daily newspaper Sabah were surrounded by protesters on both Sunday and Monday, according to news reports. Protesters shouted “sell-out media!” and called for a boycott of the mainstream channels, the reports said.

Demonstrators also attacked news vehicles during the protests on Saturday. The vans of TV channels NTV and Fox TV were sprayed with paint and pushed on their side, according to news reports. Posts on social media said TV channels CNN Turk, NTV, and Haberturk were being targeted because they had not covered the protests or had covered them from the government’s perspective.

Prime Minister Erdogan attacked social media networks for spreading what he considered to be false information and calling them the “worst menace to societies.” He said news outlets “under the roof of the [opposition] Republican People’s Party (CHP) [were making] highly irresponsible, provocative broadcasting.”

“When top government officials make anti-media statements, hostility against journalists is interpreted as allowed, even approved,” CPJ’s Ognianova said. “We urge Prime Minister Erdogan to publicly denounce the violence against journalists and ensure all media can work freely.”

The demonstrations began after a small band of environmentalists protested a government project to cut down trees in Taksim Square. Police moved in to the area, set fire to the protesters’ tents, and sprayed them with tear gas. Images of the attacks spread on social media, galvanizing thousands into protesting in Taksim Square.