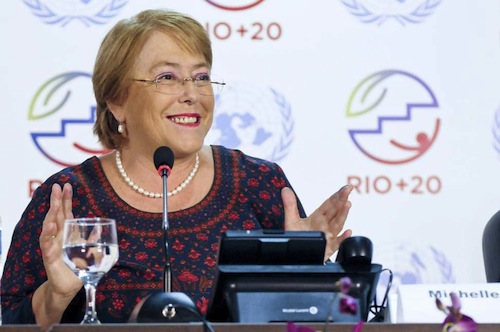 Sustainable development will not be achieved without empowering women, the head of the United Nations agency tasked with advancing gender equality said, adding that the importance of their participation must be reflected in all aspects of the outcome document of the UN Conference on Sustainable Development (Rio+20).

“We cannot afford to leave women marginalized,” the Executive Director of the UN Entity for Gender Equality and the Empowerment of Women (UN Women), Michelle Bachelet, told reporters in Rio de Janeiro, Brazil. “This is not sustainable. This social exclusion of women is not only hurting women, it is hurting all of us.”

On Friday, the responsibility for the negotiations on the outcome document was handed over to the Brazilian Government, which holds the Presidency of Rio+20. The South American nation has since presented a shorter consolidated text for countries to work on, and indicated that the consultation process on the document is expected to conclude on 18 June. It will then be put forward for adoption by Member States, when they meet from 20 to 22 June.

In her comments, Ms. Bachelet said that the outcome document must highlight women’s roles throughout the entire text, as their participation permeates all aspects of sustainable development, including agriculture, education, environmental management and decision-making, among others.

“Women’s contribution should not just be as an isolated paragraph in the text but should be mainstreamed in all the aspects of it,” she said.

The UN official emphasized actions that world leaders must undertake to fully integrate women into societies so they can contribute and benefit from sustainable development. These include taking measures to ensure that women can access leadership roles, encouraging their participation in the economy, and stopping violence and discrimination, which is still endemic in many parts of the world.

“The future women want is free from poverty and discrimination, with equal access to opportunities and leadership, with wise stewardship of natural resources,” Ms. Bachelet said. “In short, where development is sustainable everywhere and for everyone.”

Speaking at the same press encounter, the former Prime Minister of Norway and Special Envoy of the UN Secretary-General on Climate Change, Gro Harlem Brundtland, underscored the need to reaffirm and strengthen the principle on women’s participation, which was put forward on Agenda 21, the plan of action adopted at the first Earth Summit, in Rio de Janeiro, twenty years ago.

“There was an amount of awareness then, but this needs to be strengthened,” Ms. Brundtland said. “This is the time to put behind us the tendency to underestimate the role of women. It is an outrageous oversight. Now is the time to unleash the largest untapped potential for sustainable development so we do not lose out on half of the world’s intelligence.”

UN Women will be hosting a series of event throughout Rio+20, including a Leaders’ Forum tomorrow and a Women Leaders’ Summit on Thursday.