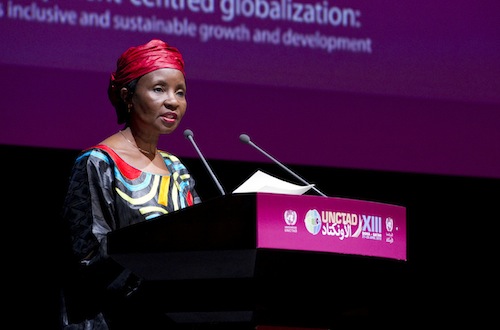 A sustained rise in prices for raw natural resources and basic agricultural goods is defying long-standing patterns and appears to be hurting poor nations through rising food and fuel costs more than it is helping them through higher revenues for their commodities exports, according to Commodities and Development Report 2012, launched at the 13th session of the UN Conference on Trade and Development (UNCTAD), in Doha, Qatar, today.

The session, known as UNCTAD XIII, is the first ministerial conference on trade and development since the fallout from the 2007-2008 global economic crisis. The sessions are held every four years, and the theme of this year’s session is ‘Development-centred globalization: Towards inclusive and sustainable growth and development.’

According to the report, mounting financial speculation in commodities and the increasing diversion of agricultural land to biofuel crops has changed the forces underpinning commodity prices, pushing them through a sustained period of increase.

What should be a benefit for poor nations, especially the globe’s 48 least developed countries – whose economies often depend heavily on commodity exports – is on balance a negative development because many of these countries are net importers of oil and staple foods.

Since the food crisis of 2008, prices for basic nourishment have been both volatile and high, the report notes – and poor families are acutely vulnerable, as they typically spend 50 per cent or more of their incomes on food.

The report’s recommendations include that steps be taken to invest in national and regional food reserves to help food-insecure countries; the recent shift to ‘finance-driven globalization,’ as it applies to commodities, should be reconsidered; fiscal and taxation policies should be adjusted so that they help developing countries reap stable, long-term economic benefits from commodities exports; and measures should be taken nationally and internationally to improve the situations of small farmers and other small commodity producers in poor countries.

UNCTAD XIII was officially opened over the weekend. Addressing the opening ceremony on Saturday, the Deputy Secretary-General, Rose Asha-Migiro, said it was appropriate that the conference was taking place in the Arab world, “where rapid political transformations are creating new job opportunities for development.”

“The recent unrest in the Arab world has shown that a lack of economic opportunity and political voice, particularly among youth, is not sustainable,” she said. “Indeed, growing awareness of social injustice and inequality has also led to protests in several advanced countries.”

The Deputy Secretary-General noted that UNCTAD XIII provided an opportunity to address five principal challenges: identifying measures needed to restore growth in the global economy; examining the causes of the crisis, especially those of a systemic nature, and identify measures to prevent its recurrence; identifying trade and developments policies that support efforts to mitigate climate change; making globalization more inclusive; and, lastly, unlocking the full potential of international business.

“UNCTAD’s universal membership, combined with its broad mandate covering trade, finance, investment, technology and sustainable development, make UNCTAD XIII a timely forum to chart the way forward,” Ms. Migiro said. “A failure at this juncture could lead to a loss of trust, and undermine the legitimacy of globalization and its development promise.  Much is at stake.”

Addressing UNCTAD XIII on Sunday, the President of the General Assembly, Nassir Abdulaziz Al-Nasser, said UNCTAD had, throughout its existence, closely reflected the concerns of the majority of the Assembly’s membership in the area of development – with that majority of nations also representing the vast majority of the world’s population, and with most of those hailing from developing countries.

“I am here today to reaffirm and renew our shared commitment to the special role that UNCTAD has played – and must continue to play – in giving voice and support to the most urgent needs of the developing nations,” the Assembly President said. “The interests of the most developed countries are also addressed when we recall the importance of South-South and triangular cooperation in the area of development.”