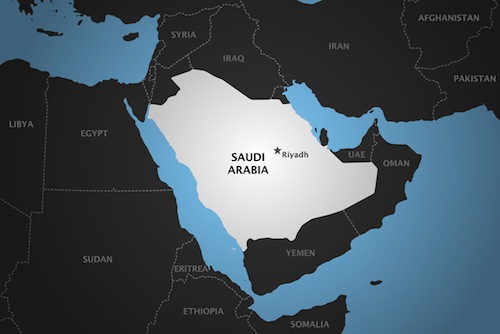 Saudi Arabia sentenced seven government critics to prison on June 24, 2013, for allegedly inciting protests and harming public order, largely by using Facebook. The Specialized Criminal Court sentenced the men, all from the Kingdom’s Eastern Province, to prison terms ranging from five to 10 years and barred them from travelling abroad for additional periods, Human Rights Watch reported.

The European Union’s High Representative Catherine Ashton and EU member states’ representatives, who are meeting with their Gulf region counterparts in Bahrain on June 30, should condemn the convictions, Human Rights Watch said.

“Sending people off to years in prison for peaceful Facebook posts sends a strong message that there’s no safe way to speak out in Saudi Arabia, even on online social networks,” said Joe Stork, deputy Middle East director at Human Rights Watch. “If the EU doesn’t raise these cases with Saudi officials this weekend, its silence will look like craven compliance with the rights abuses of an authoritarian state.”

Saudi authorities arrested the men between September 23 and 26, 2011, then detained them in the General Investigations Prison in Damman for a year and a half before charging them and putting them on trial on April 29. They were tried before the Specialized Criminal Court, set up in 2008 to deal with terrorism-related cases. Authorities did not accuse the seven of directly participating in protests, and the court failed to investigate their allegations that intelligence officers tortured them into signing confessions.

Human Rights Watch has called repeatedly for abolition of the court because of its lack of independence and unfair procedures.

In the court judgment, which Human Rights Watch obtained, the charges against the seven varied. But the court convicted them all of joining Facebook pages to “incite protests, illegal gathering, and breaking allegiance with the king” and of “assisting and encouraging these calls and corresponding with the [Facebook pages’] followers and concealing them.” All seven were also convicted of violating article 6 of the Anti-Cyber Crime Law, which prohibits producing, sending, or storing any material via an information network that “harms public order.”

The court imposed its harshest sentence – 10 years in prison – on Abd al-Hamid al-Amer. Prosecutors accused him of founding two Facebook groups, through which he allegedly “conscripted others to join the movements” and “gave them ideas and guidance on the important sites in which to protest and set the timing [of the protests].”

None of the charges accused the seven of using or advocating violence, as the presiding judge confirmed in the judgment, saying, “Breaking allegiance [with the king] comes by way of arms and it comes by way of protests, marches, and writing articles and publications … the behavior of the [second] course … is sometimes the more dangerous and more malicious method.”

The Facebook groups that prosecutors cited, including the “al-Ahsa March 4 Youth Movement” and “The Free Men of al-Ahsa,” arose in early 2011 after the authorities arrested Tawfiq al-Amer, a prominent Shia sheikh and religious leader in the al-Ahsa region of Eastern Province who had publicly called for a constitutional monarchy. His arrest provoked widespread protests and the authorities arrested dozens of his supporters in al-Ahsa in March 2011. The same court sentenced the sheikh to four years in prison in April 2013 and banned him from writing and public speaking.

The seven men all admitted to participating in the Facebook pages in support of al-Amer, but told the court they were unaware that it was a crime. They denied having any intention to break allegiance with the king or harm public order.

The prosecution, however, produced confessions that each of the seven had signed in pre-trial custody, which the court accepted as evidence of guilt although several of the defendants said intelligence officers had tortured them into signing the confessions. The presiding judge dismissed the torture allegations out of hand, describing the defendants’ claims as “not acceptable” due especially to “their inability to prove the allegations of coercion and torture.”

“The judge’s outright dismissal of the defendants’ torture allegations shows how little interest he had in finding the truth,” Stork said. “What these men did should never have been considered crimes in the first place, and the outcome was effectively determined from day one.”

A family member of one of the seven prisoners told Human Rights Watch that none of them had the money to hire a lawyer. Saudi Arabia’s Criminal Procedure Law does not entitle defendants to legal representation, and there is no provision for a public defender for those who cannot afford a lawyer. Family members told Human Rights Watch that the seven intend to appeal their convictions. If they do so unsuccessfully, the time they have already served in prison will be deducted from their sentences, the court judgment says.

Saudi Arabia has no written penal code and prosecutors and judges have discretion to criminalize acts based on their own interpretation of Islamic law. The lack of clear and predictable criminal law violates international human rights principles, such as those that prohibit arbitrary arrest and guarantee fair trials. Article 15 of the Arab Charter on Human Rights, which Saudi Arabia ratified in 2009, states: “No crime and no penalty can be established without a prior provision of the law. In all circumstances, the law most favorable to the defendant shall be applied.” International human rights standards also prohibit the criminalization of peaceful speech.

Article 32 of the Arab Charter guarantees the right to freedom of opinion and expression, and to impart news to others by any means.

The conviction of the seven comes amid a series of other convictions of peaceful dissidents and human rights activists in June. The same court sentenced a human rights activist, Mikhlif al-Shammari, to five years in prison on June 17 for “sowing discord” and a host of other charges stemming from his peaceful activism. Two days earlier, a Khobar court sentenced the women’s rights advocates Wajeha al-Huwaider and Fawzia al-Oyouni to 10 months in prison for allegedly “inciting a woman against her husband.” On June 24, a court in the central Najd town of Buraida sentenced human rights activist Abd al-Kareem al-Khodr to eight years in prison on charges that included “slandering the king” and “joining an unlicensed organization.”