Saudi Arabia: deepening of dialogue among religions to prevent conflicts 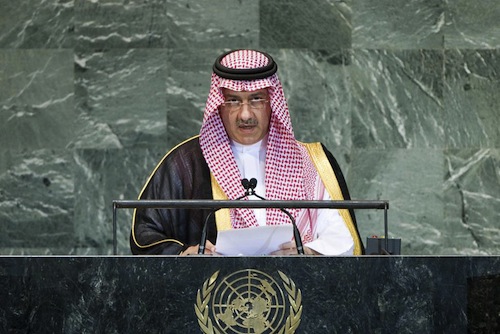 United Nations Member States must spread a culture of tolerance and understanding and deepen the dialogue among cultures and religions to prevent conflicts, the Vice Minister of Foreign Affairs of Saudi Arabia, Prince Addulaziz bin Abdullah Bin Abdulaziz, said in his statement to the world body’s General Assembly.

“In order to maintain this noble humanitarian requirement promoted by all religions, we must disseminate and deepen the dialogue with a view to achieve peace between human beings, to avoid conflicts, to put an end to acts of aggression and arrogance, to respect religious, cultural, and civilizational particularity of peoples, and to encourage pursuit of positive interaction between civilizations, cultures, and religions,” Bin Abdulaziz told the gathered delegates at the 67th Assembly’s General Debate at UN Headquarters in New York.

Saudi Arabia strongly condemns the act of “an irresponsible group who produced an offensive movie about the Prophet Muhammad,” he said – referring to an anti-Islam video produced in the US and which has led to a violent reaction in various cities across the world – and noted that in this context, his country renews its calls to enact laws and regulation that forbid the defamation of religious symbols.

Bin Abdulaziz stressed that Saudi Arabia also condemns the acts of violence that followed the release of the film against United States foreign missions, and underlined that diplomats around the world must be protected. The US Ambassador to Libya, Christopher Stevens, along with others, was recently killed in the eastern Libya city of Benghazi in violence believed to be linked to the anti-Islam video.

“Diplomatic envoys are protected by inviolability and immunity that is urged by our noble religion first and international treaties as well, due to the importance of diplomacy in preserving international interests,” the Vice Minister said.

He also urged the international community to act on the Syrian crisis which has reached “exacerbated and complicated limits,” and reiterated that Saudi Arabia stands ready to work through legitimate international frameworks in accordance to humanitarian law.

However, he noted with regret that the Security Council has not been able to reach agreement on united action to put a stop to the violence in the Middle Eastern country, in which more than 18,000 people have been killed since an anti-government uprising erupted 18 months ago.

“We regret that this regime continues to believe that it can proceed with its suppressive procedures to control the situation without any due regard to the high humanitarian losses,” he said. “The Security Council, which is entrusted with the responsibility of keeping peace and security, has failed so far to take a decision about the Syrian crisis and to stop the bloodshed therein.”

“This matter gave the Syrian regime a green light to proceed with its crimes against the Syrian people, in a race against time, to accomplish its objectives using the most advanced means of killing and destruction,” the Vice Minister added.

A new strategy that aims to achieve a peaceful transition to power and that surpasses the previous plan put forward by the former Joint envoy of the UN and the League of Arab States on the Syrian crisis, Kofi Annan, is vital, the Saudi official said, adding that the current UN-Arab League Representative, Lakhdar Brahimi, will not be able to move forward unless the Security Council provides him with the support he needs to deal with the crisis at a political and humanitarian level.

Regarding the Middle East peace process, Bin Abdulaziz told the General Assembly that his country believes the way this protracted conflict can be solved is by responding to the legitimate rights of the Palestinian people, particularly their right to establish an independent State.

“The Kingdom of Saudi Arabia, which grants the Palestinian issue top priority, urges the international community represented by the United Nations to swiftly put an end to the tragedy of the Palestinian people and to provide its National Authority with all forms of support and assistance,” he said, adding that Saudi Arabia “is sparing no effort to meet all its obligations towards the peace process and towards our Palestinian brothers by the provision of various types of support and assistance.”

The Saudi official is one of scores of world leaders and other high-level officials presenting their views and comments on issues of individual national and international relevance at the Assembly’s General Debate, which ends on 1 October.