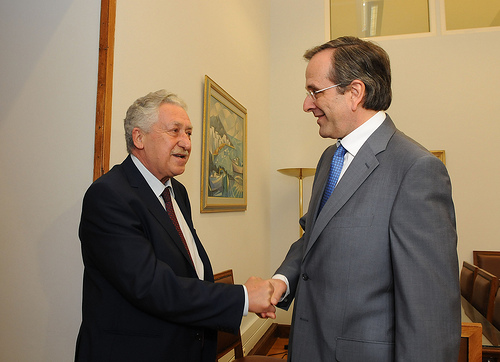 Two days after the general election Greece is engaged in the second day of coalition talks as ND leader Antonis Samaras who came first in the vote vowed to meet bailout commitments and has called for a broad-based, “national salvation government”.

New Democracy , PASOK and Democratic Left are hovering on the formation of coalition government Tuesday after holding talks yesterday, To Vima reports. Anti-bailout SYRIZA and Independent Greeks have rejected the posibility to join a coalition government as both insist they will not collaborate with ND and PASOK or any party that is willing to implement the harsh austerity measures taken in return for Greece’s bailout loans.

Samaras received a mandate to form a coalition government from the president on Monday,and met with the leaders of all the potential coalition partners.

In a statement after his meeting with Samaras, Democratic Left leader Kouvelis hinted that his party might be ready to join the coalition.

However, Venizelos proposed that SYRIZA should be brought into the coalition talks but his insistence that a government must be formed by Tuesday evening suggests he recognises that that’s not possible, according to ANA.

Evangelos Venizelos, PASOK head and a former finance minister, finished in the election third behind Syriza. His 33 seats in the 300-member parliament mean he could form a government with New Democracy, which gained 129 seats.    Venizelos, however, insisted on a broad coalition.

The addition of the leftists in the coalition would give a slightly wider public appeal and who also send away some of the criticism that the new government would simply be more of the same, as PASOK and ND have governed Greece almost exclusively since 1974, Kathimerini writes.

Meanwhile, Chancellor Angela Merkel, speaking at a meeting of G20 leaders in Mexico, said any loosening of Greece’s agreed reforms would be unacceptable and repeated that Athens had to stick to its bailout commitments.