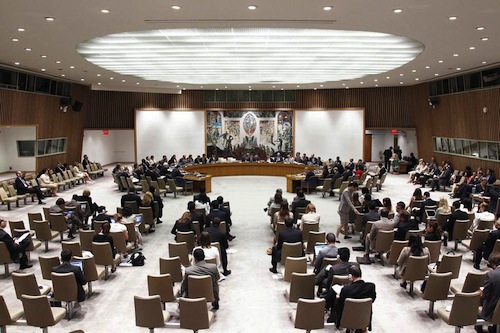 The United Nations Security Council has condemned ‘in the strongest terms’ an attack near a hospital in the city of Benghazi, and stressed that the international community remains committed to supporting Libya’s democratic transition.

In a media statement, the Security Council expressed its condolences to the families of those killed in the 13 May attack and to the Government and people of Libya.

According to reports, the car bomb killed a number of people, including children, and injured others.

The 15-member Council urged authorities to bring to justice the perpetrators, organizers, financiers and sponsors of “these reprehensible acts of terrorism” and urged the international community to cooperate with Libyan authorities.

In the statement, the Council reaffirmed that terrorism in all its forms and manifestations constitutes one of the most serious threats to international peace and security, and that “any acts of terrorism are criminal unjustifiable, regardless of their motivation, wherever, whenever and by whomsoever committed.”

The Council reiterated the need to combat terrorism by all means, in accordance with the United Nations Charter and obligations under international law, in particular international human rights, refugee and humanitarian law, threats to international peace and security caused by terrorist acts.

Earlier, the UN Assistance Mission in Libya (UNSMIL) condemned the attack and reiterated its commitment to support the efforts of the Libyan Government and people to ensure the success of the democratic transition process, which has been under way since the toppling of Muammar al-Qadhafi two years ago.

The former leader ruled the North African country for more than 40 years until a pro-democracy uprising in 2011 – similar to the protests in other countries in the Middle East and North Africa – led to civil war and the end of his regime.