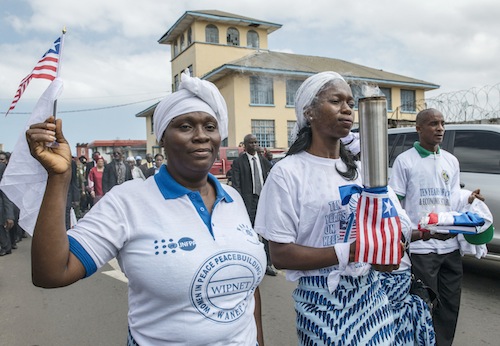 The Security Council extended the mandate of the United Nations Mission in Liberia (UNMIL) for another year, urging the Government to develop effective security agencies in a country where 150,000 people, mostly civilians, were killed in a civil war that ended a decade ago.

“Long-term stability will require the Government of Liberia to develop and sustain a self-sufficient, capable, and competent security sector to build the confidence of all Liberians,” the 15-member body said in a unanimously adopted resolution.

It endorsed the continued drawdown of the mission’s military component agreed upon last year by a further 1,129 personnel by next September, with the goal of leaving UNMIL’s military strength at some 3,750 personnel by July 2015.

As of last July there were 5,757 UN peacekeeping troops in the West African country, where the world body has played a major role in restoring stability and democracy.

At the height of its operations, which began in 2003, UNMIL totalled more than 15,000 troops and well over 1,000 police personnel, and helped oversee two series of democratic elections after more than a decade of civil war which, beyond the death toll, drove 850,000 refugees into neighbouring countries, displaced scores of thousands more internally and inflicted untold damage on the nation’s infrastructure.

While welcoming overall progress towards restoring peace, security, and stability, today’s resolution, which maintained the current authorized strength of UNMIL’s police component at 1,795 personnel, including 10 formed police units, noted the continuing problems with violent crime and sexual and gender-based violence.

“Women and girls in Liberia continue to face a high incidence of sexual and gender-based violence,” it declared, calling on the Government to continue to combat sexual violence, particularly against children, and in coordination with UNMIL, to continue to fight impunity for perpetrators of such crimes and provide redress, support, and protection to victims.

The resolution also called on the Governments of Côte d’Ivoire and Liberia to further enhance their cooperation over their joint border, scene of recent violence, by increased monitoring, information sharing and coordinated actions, and implementing a shared border strategy to support the disarmament and repatriation of foreign armed elements on both sides of the border and the voluntary return of refugees in safety and dignity.

Other clauses called for an ongoing battle against corruption, promotion of transparency, good governance, human rights and reconciliation, participation of women in conflict prevention and peacebuilding, and security and rule of law organs that are fully and independently operational.