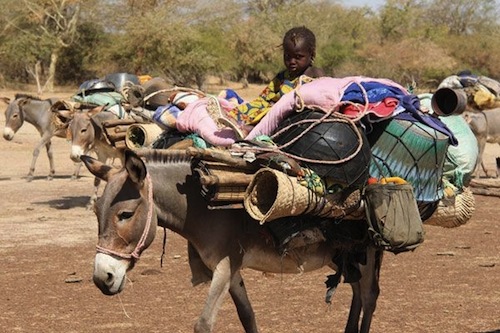 Citing the threat to regional peace from terrorists and Islamic militants in rebel-held northern Mali, the United Nations Security Council held out the possibility of endorsing, within the next 45 days, an international military force to restore the unity of the West African country.

In a unanimously adopted resolution, the 15-member body called on Secretary-General Ban Ki-moon to provide, at once, military and security planners to the Economic Community of West African States (ECOWAS), the African Union (AU) and other partners to help frame a response to a request by Mali’s transitional authorities for such a force, and to report back within 45 days.

Upon receipt of the report, and acting under Chapter VII of the UN Charter, the Council said it was ready “to respond to the request of the Transitional authorities of Mali regarding an international military force assisting the Malian Armed Forces in recovering the occupied regions in the north of Mali.”

Chapter VII of the Charter allows the Council to use force in the face of a threat to peace or aggression, taking “such action by air, sea, or land forces as may be necessary to maintain or restore international peace and security,” including blockades and other operations by the forces of Member States.

In August, the Council urged ECOWAS, in cooperation with the transitional authorities, the AU Commission and regional countries, to prepare detailed proposals for a stabilization force to restore the territorial integrity of the country.

Fighting between Malian Government forces and Tuareg rebels broke out in the country’s north in January. The instability and insecurity resulting from the renewed clashes, as well as the proliferation of armed groups in the region, drought and political instability in the wake of a military coup d’état in March, have driven 500,000 Malians from their homes, 270,000 of them to neighbouring countries.

In addition, Islamist militants currently control the country’s north and have imposed strict Sharia law, including amputation of limbs as punishment.

The Council called on Malian rebel groups to cut off all ties to terrorist organizations, notably Al-Qaida in the Islamic Maghreb (AQIM) and affiliated groups, and expressed its readiness to adopt targeted sanctions against those groups which do not do so.

It also urged the Transitional authorities, rebels and other legitimate representatives of the local population in the northern Mali to engage, as soon as possible, in credible negotiations to seek a sustainable political solution in conformity with the country’s unity, and demanded that all groups in the north cease all human rights violations such as attacks against civilians, sexual violence, recruitments of child soldiers and forced displacements.

Today’s Council resolution reiterated “grave concern” at the continuing deterioration of the security and humanitarian situation in the north of Mali, the increasing entrenchment of terrorist elements including AQIM, affiliated groups and other extremist groups, and its consequences for the countries of the Sahel and beyond.

In addition, it strongly condemned the abuses of human rights committed “by armed rebels, terrorist and other extremist groups, including violence against its civilians, notably women and children, killings, hostage-taking, pillaging, theft, destruction of cultural and religious sites and recruitment of child soldiers,” and stressed that some of these acts might amount to war crimes and crimes against humanity.