Posted on: January 11th, 2013 by AlYunaniya Staff No Comments 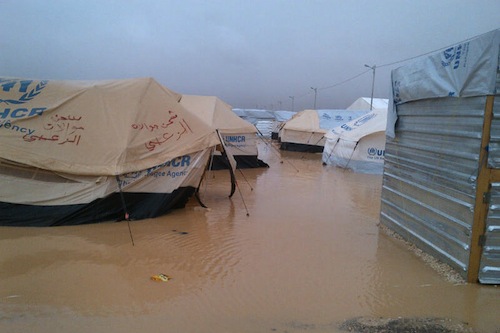 Severe weather conditions across northern Jordan – including heavy rain, snow and sub-zero temperatures – have greatly worsened the situation of children among some 55,000 Syrian refugees living at a camp there, according to the United Nations Children’s Fund (UNICEF).

Widespread flooding has occurred, swamping tents and overwhelming the drainage system in the Za’atari camp, with deep mud making it harder to drain the water and for water-removal trucks to access the camp, UNICEF noted in a news release.

Areas containing several so-called child friendly spaces – where children can play, learn and receive psychosocial support – have been flooded, and a tent used to shelter unaccompanied minors has collapsed.

“The next 72 hours will be a critical test of our ability to meet the basic needs of children and their families at Za’atari,” said the UNICEF Representative in Jordan, Dominique Hyde. “Alongside the Government of Jordan and our other partners, we are doing everything possible to ensure services are maintained and that children stay warm and dry.”

The deteriorating situation at the Za’atari camp comes amid a continuing influx of refugees from across the border, fleeing the violence in Syria, where more than 60,000 people, mostly civilians, have been killed since the uprising against President Bashar al-Assad began in early 2011.

Recent months have witnessed an escalation in the conflict, which is now in its 23rd month. Since the beginning of January this year, close to 10,000 Syrians have sought safety in Jordan.

Mr. Hyde added that a lack of funding was a major constraint on relief activities.

“The resources we raised in 2012 have been exhausted, and no fresh funds have come for this year,” he said. “We urgently appeal to the international community and donors in general to commit fresh funding as soon as possible.”

UNICEF stated that it and its partners are working “around the clock” to sustain the provision of services to people in Za’atari camp, and in particular, to ensure that all refugees have access to water, latrines and showers.

The UN agency has distributed emergency warm clothing along with sleeping mats to replace mattresses soaked by the rain. Heaters have been distributed to families now living in prefabricated buildings within the camp.

In relation to funding for relief activities, Secretary-General Ban Ki-moon will chair a high-level conference later this month to raise funds to alleviate the worsening plight of millions of Syrians affected by the ongoing conflict.

The conference, to be held on 30 January in Kuwait, follows a $1.5 billion appealed launched in December by the United Nations and its partners, who have been hampered in their efforts to carry out relief activities due to lack of funds.

The bulk of the appeal – $1 billion – is to support refugees fleeing Syria to Jordan, Iraq, Lebanon, Turkey and Egypt. It is based on planning estimates that up to a million Syrian refugees will need help during the first half of 2013.

Another $519 million will be needed to support an estimated four million people inside Syria who need urgent humanitarian assistance, including an estimated two million internally displaced persons.