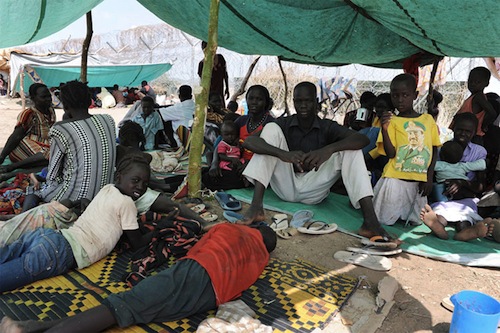 Indiscriminate mortar shelling in the Sudanese city of Kadugli in South Kordofan province has forced the United Nations to relocate its staff from a region where fighting has prevented aid agencies from reaching thousands of displaced people, especially in rebel-controlled areas.

The UN Office for the Coordination of Humanitarian Affairs (OCHA) said several mortar rounds landed near the UN Children’s Fund (UNICEF) offices, a local school and a local police station. No group has claimed responsibility for yesterday’s attack. As a precautionary measure, UN staff have been sent to a base of the UN Interim Security Force for Abyei (UNISFA), a disputed area between Sudan and South Sudan.

UN Resident and Humanitarian Coordinator in Sudan Ali Al-Za’tari called the attack a reprehensible violation of international humanitarian law. According to media reports from Sudan, there were a number of civilian casualties.

“UN and humanitarian partners have not been able to deliver assistance to people in need in the SPLM-North controlled areas of South Kordofan for quite some time, but are continuing to provide relief assistance to people affected by the fighting in government-controlled areas of the state,” OCHA spokesperson Jens Laerke told reporters in Geneva, using the acronym for the rebel Sudan People’s Liberation Movement-North (SPLM-N).

Lat month the UN Security Council voiced grave concern about the worsening humanitarian situation in South Kordofan and neighbouring Blue Nile state and urged the Sudanese Government to expedite the unhindered delivery of humanitarian assistance to the affected civilian populations as rapidly as possible.

The two states, which lie on the border with South Sudan, have been beset by fighting between Sudanese forces and the SPLM-N since last year. The SPLM-N was previously part of the rebel movement that fought for the independence of South Sudan, which seceded from Sudan last year.