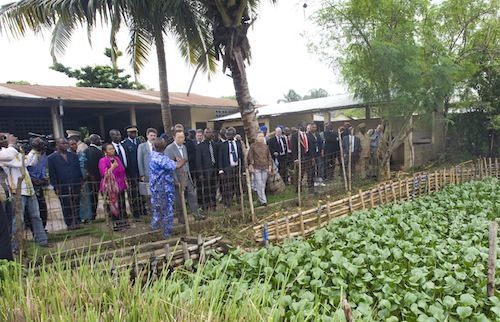 Secretary-General Ban Ki-moon today called for unleashing the potential of small farmers and food producers worldwide, the majority of whom are women, to ensure food security is guaranteed for all.

According to the UN announcement, Ban said: “every household needs to be able to afford safe, nutritious foods”, in a  message to a high-level roundtable on food and nutrition security and sustainable agriculture. “Markets need to be open and fair. Women and children need better nutrition to avoid the hidden disgrace of stunting, which affects nearly 200 million children. And the poorest people need to know they can count on social protection that will not let them go hungry.”

“We want everyone to enjoy their right to food,” stated Mr. Ban. “To achieve these objectives, we need to transform the way we approach food security, in particular by unleashing the potential of millions of small farmers and food producers, of whom the majority are women.”

The Secretary-General also cited the need to encourage the production of more – and more nutritious – food while protecting natural resources, and to recognize the important links between food, water and energy.

It is also necessary to stop wasting food along the value chain, and start reflecting the benefits of natural resources in calculating the value of food, he said, adding that only then will it be possible for governments, farmers, businesses and consumers to choose the most sustainable options for food security.

To transform agriculture and food systems, all stakeholders should be involved in decision-making, especially women and small-scale farmers and food producers, Mr. Ban stressed.

“Sustainable agriculture and food security will be best achieved when consumers and producers, and the private and public sectors agree on principles and build partnerships.”

Today’s roundtable comes less than 100 days before the UN Conference on Sustainable Development, known as Rio+20, that will be held in Brazil in June.

Sustainable development is one of the five priorities of Mr. Ban’s Action Agenda for the next five years, and food and nutrition security and sustainable agriculture figure prominently in that plan. Also, his High-level Panel on Global Sustainability calls for a “21st century Green Revolution” that increases productivity while reducing resource intensity and protects biodiversity.