SNC: US wants Baath regime after Assad; Clinton calls for overhaul of SNC 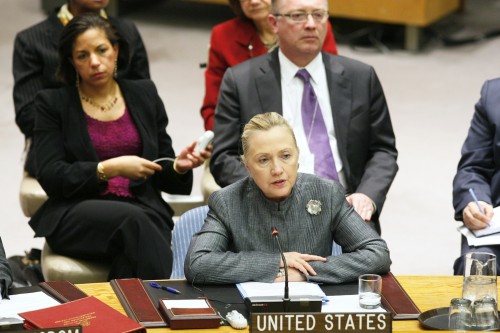 The Syrian National Council (SNC) has said Washington is not in favor of a ‘de-Baathification’ of Syria after al-Assad following Secretary of State Hillary Clinton’s call for a new Syrian opposition more representative of those fighting on the frontlines rather than exiles on Wednesday.

In a major shift in U.S. policy in Syria Washington announced on Wednesday its giving up on the exile-heavy Syrian National Council and seeking creation of a more representative opposition leadership.

U.S. officials have expressed disappointment with the SNC’s inability to create a consistent plan and its lack of agreement and cooperation with different internal groups.

U.S. Secretary of State Hillary Clinton said the administration was suggesting names that should be featured prominently in any new rebel leadership that emerged from talks starting next week in Doha. She dismissed the SNC, regime opponents who have lived in exile for decades.

“We’ve made it clear that the SNC can no longer be viewed as the visible leader of the opposition. They can be part of a larger opposition, but that opposition must include people from inside Syria and others who have a legitimate voice which must be heard,” the Associated Press quoted her as saying.

“The SNC has not succeeded in broadening its leadership, not to more insiders, not ethnically, and not geographically. Meanwhile, we and other Friends of the Syrian People have encountered individuals who have already displayed leadership and want to be part of Syria’s future. And so we’re bringing these people to the attention of the Doha participants. We’re not choosing anyone. Only the Syrian people can do that. Rather, we’re helping bring attention to a broader pool of candidates for the Syrian people to consider for future leadership.”

The SNC Chairman on Thursday striked back against the Clinton’s criticism saying that the SNC had failed to “strongly resist the efforts by the extremists to hijack the Syrian revolution”.

“The international community is responsible, through its lack of support for the Syrian people, for the growth of extremism in Syria,” he said according to AFP.

Meanwhile, fighting in Syria rages as Syrian rebels have killed at least 28 government soldiers in attacks on three army checkpoints on the main road from the capital Damascus to the northern city of Aleppo, Al Jazeera reported citing an activist group.  Government warplanes continued to bomb opposition strongholds across the country, including the northern Damascus suburb of Harasta.