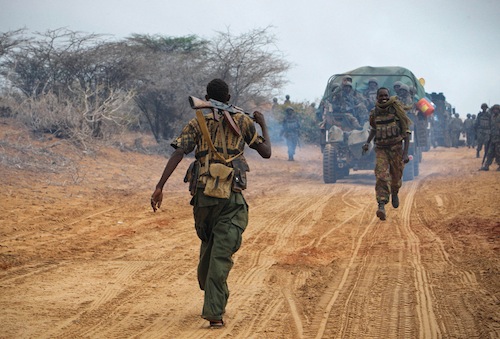 With the sound of construction hammers replacing the blast of guns and Al Shabaab militants ousted from their last major stronghold in Somalia, an “unimaginable” change has taken hold although the threats of guerrilla war and terrorism persist, the top United Nations envoy for the Horn of Africa country said.

“It may be more difficult, it may be more challenging, [but] we have moved from transition to transformation which entails peacebuilding [and] around it is state-building,” the Secretary-General’s Special Representative for Somalia, Augustine Mahiga, told a news conference in Nairobi, in neighbouring Kenya, of the UN’s future role in a country that had been torn apart by more than 20 years of internecine warfare.

“There is definitely unimaginable change in Somalia from a war situation to an increasing peaceful situation,” he added.

The UN envoy paid tribute to the UN-backed African Union force in Somalia (AMISOM) and Somali forces, which last month drove the Al Shabaab out of the port city of Kismayo, in the country’s south, and praised Somalia’s transition process which has seen the adoption of a new constitution, the convening of a new parliament, and the selection of a new president in recent months.

“Ending the transition was momentous because this was a success story which Somalia has not witnessed in the past 21 years,” Mahiga said, using phrases such as “turning the corner” and “quantum leap” to describe the progress made.

But he warned that the capture of Kismayo does not mean the end of the Al Shabaab, noting that the challenge from a degraded Al Shabaab may continue.

“We have seen it in Mogadishu. They do what they are best at: terrorist bombs, devices, suicide bombs, roadside bombs. That is likely to continue,” he said, noting that there could still be guerrilla warfare and even more conventional warfare in some parts of Somalia.

Turning to the role of the UN Political Office for Somalia (UNPOS), which he heads, Mr. Mahiga said Somalia’s new President, Hassan Sheikh Mohamud, had already had two telephone calls with Secretary-General Ban Ki-moon and the two had agreed to begin with peacebuilding activities, with every UN agency, fund and programme working there.

“The UN will begin an internal strategic review of its strategies, objectives, priorities,” he stated, stressing that the world body was now moving “from a light foot print to a heavy footprint” in a country where it has so far had only a limited physical presence.

He also stressed the need for reconciliation among Somalia’s many actors, suggesting that the chances of reaching some elements of the Al Shabaab may be better now as their security and military situation has been degraded.

Stabilization, he noted, needs include establishing law and order and the creation of military and police services, setting up local and regional administrations, and the delivery of basic services such a water and health.

Mahiga’s most vivid description of the improvement in the country came when he described his own experience since he took up his post.

“When I first went to Mogadishu two years ago I was in a military truck. The distance from the airport to Villa Somalia (Government centre) is may be six or seven kilometres,” he said.

“There wasn’t a single building that did no have let alone bullet holes but had been destroyed. When I was sitting with the president talking to him for two hours, sometimes three hours, from minute one to minute finish it was just sounds of guns and guns of different calibre, small guns, big guns, big booms, whatever…

“Today, the streets are full of human beings. There are traffic jams similar to what is seen travelling from here to the town centre (of Nairobi). Construction and repair work is going on, the sound of hammers and all this has replaced the sound of guns. I see young men and women walking in the streets of Mogadishu well beyond 8 o’clock… to 10 o’clock.

More international airlines now fly into Mogadishu, and, internally, one can go from the capital to Baidoa, Garowe and other towns, where previously fighting and factional tensions had made such journeys prohibitively perilous, he added.

“This is a quantum change in 18 months and improving,” Mr. Mahiga said, while warning that there was still much to be done in the fields of both stabilization and humanitarian endeavour in a country where 1.5 million people still need humanitarian assistance to survive.