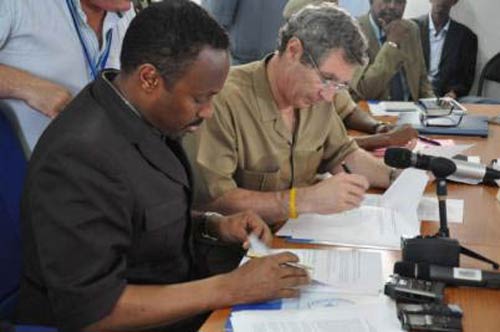 The United Nations and Somalia’s Transitional Federal Government (TFG) have signed an action plan on ending the killing and maiming children in the Horn of Africa country.

Signed by the Deputy Prime Minister and Minister of Defence, Hussein Arab Isse, on behalf of the TFG, and the Secretary-General’s Deputy Special Representative for Somalia, Peter de Clercq, on behalf of the United Nations, the plan commits the Somali National Armed Forces, allied militia and military groups under its control to ending the killing and maiming of children in contravention of international law.

“We are calling on donors to support the Somali Government and its armed forces towards bringing about and enforcing the changes that will put these terrible practices to an end,” Mr. de Clercq said in a news release issued by the UN Political Office for Somalia (UNPOS).

The plan is the second one signed between the TFG and United Nations that helps bring about measures to halt and prevent the violation of children’s rights. The first action plan – to end the recruitment and use of children by the Somali National Armed Forces – was agreed on by the TFG in July.

According to UNPOS, full compliance with the latest action plan will result in the Government of Somalia being removed from Secretary-General Ban Ki-moon’s list of parties who recruit, use, kill and maim children.