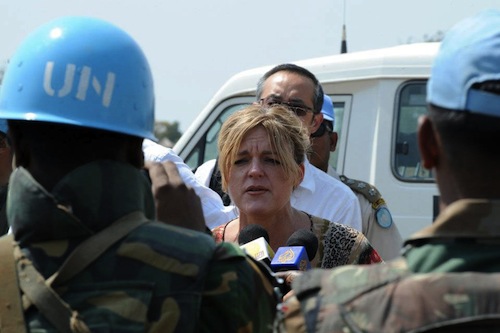 The top United Nations official in South Sudan condemned an attack by armed insurgents in the country’s eastern Jonglei state, noting that the violence was a deliberate attempt to undermine the country’s progress towards peace and reconciliation.

On 23 August, armed fighters believed to be loyal to a renegade leader named David Yau Yau attacked South Sudanese troops stationed in the Nanaam area of Pibor County in Jonglei.

According to the UN Mission in South Sudan (UNMISS), 24 soldiers were killed in the fighting while numerous others are still reported missing or injured.

“I strongly condemn this attack and reiterate UNMISS’ call on all communities, institutions and actors engaged in the Jonglei peace process and related security operations to stay the course in making further progress and in consolidating the gains made to date,” the Secretary-General’s Special Representative for South Sudan and head of UNMISS, Hilde F. Johnson, said in a news release.

In the immediate aftermath of the attack, the UN peacekeeping mission provided support to the South Sudanese armed forces, assisting in the evacuation of the wounded and providing aerial transportation to local government officials travelling to visit communities in the area.

Large-scale cattle raids between the Murle and Lou Nuer communities, for instance, have posed an ongoing threat to the area’s peace and security with violence causing numerous casualties, including many dead, wounded, abducted and displaced. It is estimated that clashes between the two groups have affected some 120,000 people in Jonglei since December 2011.

In its press release, UNMISS noted that the recent attack may have been deliberately planned to undermine progress made in improving the regional security environment, as well as in establishing inter-ethnic reconciliation.

The peacekeeping operation added that it would continue to work with the Government of South Sudan and other national and local authorities towards the achievement of “durable peace, security and stability in Jonglei.”