Spain’s recession deepens euro crisis, as elections in Greece near 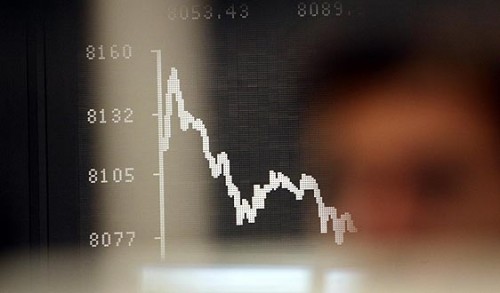 Spain’s economy shrank in the first quarter of 2012, with news of a recession in Spain, deepening the euro zone’s economic debt crisis, while parliamentary elections in Greece and presidential elections in France can shake the euro zone’s ability to reach a deal on how to escape recession.

Gross domestic product fell 0.3 percent, according to data issued by the National Statistics Institute, while Spain’s IBEX index finished April down 12.5 percent in its worst monthly showing in nearly 1-1/2 years. Investors braced for more turbulence in May, Reuters reported.

The country is caught between  pressure from its European counterparts to fix public finances and growing resistance  to austerity measures that have helped push unemployment to more than double the EU average.

The statistics were released while new figures about unemployment rate of 25 percent  sparked protests, with thousands taking to the streets.

Economists said that the country’s spending cuts aimed at meeting EU deficit limits, together with troubles in the banking sector, would delay any return to growth until late this year or beyond, according to Bloomberg.

It is the second recession since 2009 for the euro zone’s fourth largest economy and came as the government tries to convince investors it would not need financial bailouts like other European countries caught in the debt crisis.

Standard & Poor’s, the ratings agency, made things worse  with a two-notch rating downgrade last week and on Monday it severely cut the credit score. The banks were damaged by the real estate collapse that began in 2008 and now bad loans in other sectors of the economy have risen sharply.

A war of words erupted last week between Hollande, who decried Germany’s fiscal-focused leadership in the two-year-old financial crisis, and Merkel, who said that the turmoil can’t be resolved without cutting debt. Polls show that Hollande is likely to succeed Nicolas Sarkozy as France’s next president after winning the first round of voting April 22, according to Kathimerini.

Greece will also hold elections on May 6, with polls showing that no party will win enough votes for a parliamentary majority. The lack of a clear mandate could complicate Greek bailout efforts, since the new government must spell tell its creditors in June how it will make fresh budget cuts.