Posted on: November 25th, 2012 by AlYunaniya Staff No Comments 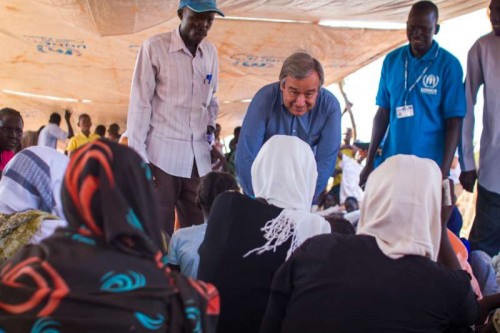 UN High Commissioner for Refugees António Guterres on Friday wrapped up a three-day visit to South Sudan aimed at bringing attention and support for tens of thousands of refugees from neighbouring Sudan. Guterres, who met refugees at the Yida settlement close to the border, described the situation in South Sudan as “a forgotten refugee crisis.”

The High Commissioner was particularly concerned about the welfare of the 60,000 civilians living in Yida and he urged the refugees there to move to sites deeper inside South Sudan and located in a safer, healthier and easier to access environment.

“This is the most threatening situation I have ever seen in a refugee camp. Not only because it is close to a war zone, but because of access – all things have to be brought in by plane,” he said during his visit. Yida is located in wetland in Sudan’s Unity state just 12 kilometres from the border.

Tens of thousands of civilians have fled to Sudan since the middle of last year to escape fighting in Sudan’s South Kordofan state between the Sudan Armed Forces and the Sudan People’s Liberation Movement-North. The flow almost ceased during the just ended rainy season, when Yida becomes a virtual island, but it is picking up strongly and UNHCR is prepared for a major influx.

Guterres, who was accompanied during his Yida visit by South Sudan’s Minister of Humanitarian Affairs and Disaster Management Joseph Lual Achuil, said that despite the security concerns he was “very encouraged by the government’s commitment to make sure armed people do not enter the camp.”

UNHCR has been looking at new sites in safer areas where it will be easier to provide aid and basic services, including health care and education. Guterres urged those he met to move, while noting that “the people who arrive [in Yida] are dehydrated, malnourished, exhausted.” Most of the new arrivals are women and children, while almost 70 per cent of those in Yida are aged under 18 years.

A large new influx of refugees is also expected from Sudan’s Blue Nile state into South Sudan’s Upper Nile state, where UNHCR runs four camps sheltering more than 110,000 refugees. “We will be doing everything we can to mobilize the capacity to respond to the needs of the people who have suffered so much,” Guterres said.

The High Commissioner, who met South Sudan’s President Salva Kiir Mayardit and other top officials during his visit, appealed for a political solution to end the hostilities. Meanwhile, urgent financial support is needed for the emergency operations in South Sudan.