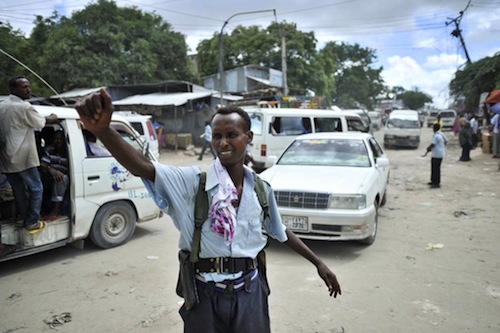 According to media reports, Somalia’s al-Shabab Islamic militants are claiming responsibility for a suicide car bombing that killed two people and wounded three others at a building housing Turkish embassy staff in Mogadishu.

A Turkish security guard and a Somali civilian were killed. Guards shot at the car as it approached the building Saturday, killing two attackers before a third militant set off the bomb.

A Somali witness told AFP that an explosives-laden vehicle rammed the gates of a building housing embassy staff and exploded, also killing what he described as a passer-by.

The Shebab claimed the attack on their twitter feed, saying their forces “have just carried out an operation targeting a group of Turkish diplomats.”

“The Turkish are part of a group of nations bolstering the apostate regime and attempting to suppress the establishment of Islamic sharia,” the Islamists said.

The top United Nations envoy in Somalia strongly condemned a suicide attack against an office housing Turkish staff earlier today in Mogadishu which reportedly ended in deaths and injuries.

“My deep sympathy and sincere condolences go to the Turkish government, the victims and those who have lost their loved ones,” said Nicholas Kay, the Secretary-General’s Special Representative for Somalia.

“Turkey has been working tirelessly and bravely to help the Somali people over the last few years,” he noted.

The UN Assistance Mission in Somalia (UNSOM), which Kay heads, added that this is one of the several attacks that Al Shabaab has carried out during the holy month of Ramadan.

“I condemn all acts of terrorism,” Kay stressed. He added that UNSOM and international partners “stand firm in our efforts to help the Somali people to enjoy the peace and development they so desperately want and need.”

UNSOM, which began operations last month, is tasked by the Council with supporting the Horn of Africa nation as it seeks to build on hard-won gains achieved last year and emerge from over two decades of strife.