Posted on: October 30th, 2012 by AlYunaniya Staff No Comments 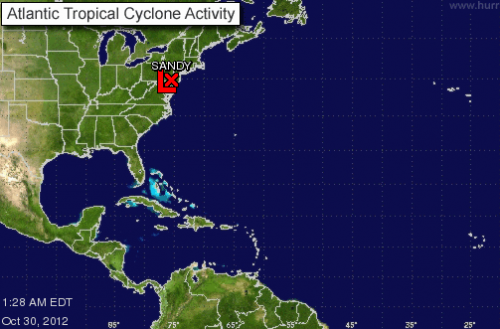 Superstorm Sandy, one of the biggest storms to ever hit the US, slammed into a number of states along the Eastern coast of the US on Monday night, shutting down transportation, forcing evacuations and interrupting the presidential election campaign.

Though no longer a hurricane according to the National Hurricane Center, “post-tropical” superstorm Sandy has left at least 12 people dead from West Virginia to North Carolina and Connecticut.

More than 5.5 million people were left without electrical power by the storm and more than one million people across a dozen states were ordered to evacuate, AFP reported.

US stock markets were closed on Monday, the first time since the September 11, 2001, attacks, and will remain shut on Tuesday, according to Reuters, while the federal government in Washington was also closed, and so too were schools up and down the East Coast.

The storm interrupted the US presidential campaign with eight days to go before the election. President Barack Obama and his Republican rival, Mitt Romney, both called off events, with Obama returning to Washington to monitor the storm from the White House.

President Obama, speaking after a briefing at the federal government’s storm response center in Washington discussed how federal emergency response teams are moving resources into place to ensure that potentially affected areas have the food, water, and disaster relief supplies they need to begin recovery.

“Obviously, everybody is aware at this point that this is going to be a big and powerful storm,” the President said. “And all across the Eastern seaboard, I think everybody is taking the appropriate preparations.”

He also urged residents in the path of Hurricane Sandy to heed warnings from local officials.

“The most important message that I have for the public right now is, please listen to what your state and local officials are saying,” he said from the White House Briefing Room. “When they tell you to evacuate, you need to evacuate. Do not delay. Don’t pause; don’t question the instructions that are being given, because this is a serious storm and it could potentially have fatal consequence if people haven’t acted quickly.”

Asked about potential effect on the election, Obama said: “The election will take care of itself next week,” he said.