Syria anniversary: EU push to lift arms embargo; FSA vows not to give up 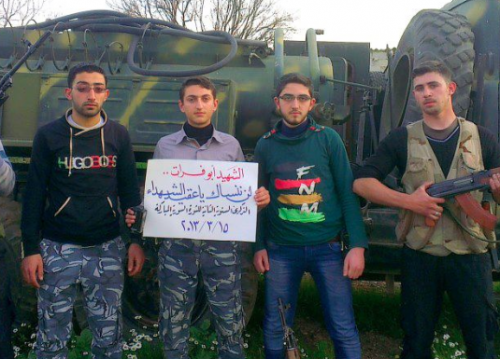 “The question of the arms embargo was raised by some members of the European Council. We agreed to task our foreign ministers to assess the situation as a matter of priority already at their informal meeting next week in Dublin, and to develop common positions.”

The lastest development comes amid calls by France and Britain to lift an embargo on supplying weapons to the Syrian opposition with President Francois Hollande warning that France could do it alone if no EU agreement is reached.

The European Union is divided over the issue, with some fearing that sending more weapons to Syria could further escalate the  two-year conflict.

Meanwhile, the Syrian Revolution 2011 Facebook page,  has called on syrians to take to the streets after Friday prayers under the rallying cry “Two years of sacrifice towards victory” as the syrian government beefed up security measures.

The conflict erupted in March 2011 when protesters inspired by Arab world uprisings took to the streets  across Syria calling for freedom.

At the same time, the commander of the rebel Free Syrian Army vowed to continue fighting until Assad’s “criminal” regime is gone, AP reported.

“Dear friends, the Free Syrian Army (fighters) will not give up.”

The United Nations humanitarian chief today urged the international community to do more to end the crisis in Syria which is now entering its third year.

The call came as Under-Secretary-General for Humanitarian Affairs Valerie Amos wrapped up a two-day visit to Turkey, where she spoke with Syrian refugees in the south-eastern Kilis Province.

“I met families who fled their homes more than 18 months ago. They are in despair. They feel abandoned by the international community. They all want the same thing: the conflict to end so that they can go home,”

As part of her visit, Ms. Amos also met in Ankara with the Turkish Deputy Prime Minister, Besir Atalay, and Foreign Minister Ahmet Davutoglu, as well as other Government officials and senior humanitarian officials, including the President of the Turkish Red Crescent Society (KIZILAY), Ahmet Lutfi Akar.

Syria has been wracked by violence since the uprising against President Bashar al-Assad began in March 2011. Up to 70,000 people have died, more than 1 million have fled to neighbouring countries, 2 million have been internally displaced and up to 4 million are in need of humanitarian assistance.