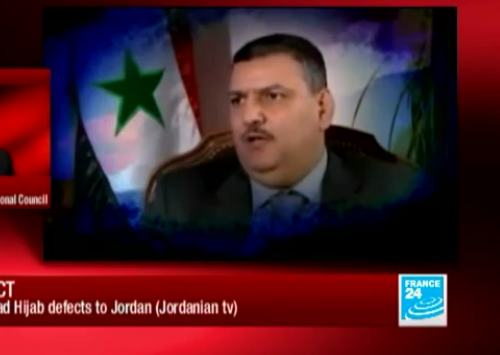 Halki, born in 1964, is from the southern province of Deraa where the uprising against  Assad’s  rule erupted, replacing caretaker premier Omar Ghalawanji who was appointed hours after Hijab’s defection.

Like Hijab, Halki who belongs to Syria’s Sunni Muslim majority defected on Monday after only two month in office. Hijab fled to Jordan with his family.

The White House said the defection of Syrian Prime Minister Riyad Hijab shows that President Bashar al Assad’s government is “crumbling from within.”

“We have staged a tactical withdrawal from Salaheddin. The district is completely empty of rebel fighters. Regime forces are now advancing into Salaheddin,” said Hossam Abu Mohammed, a Free Syrian Army (FSA) commander, according to AFP.

“The fighters are withdrawing to Sukari district, where they are preparing a counter-attack,” he told AFP by telephone.

Day two of the most significant ground attack in Aleppo came as Syria’s key regional ally Iran prepared to host a meeting aimed at finding ways to end the ongoing conflict.