Posted on: June 2nd, 2012 by AlYunaniya Staff No Comments 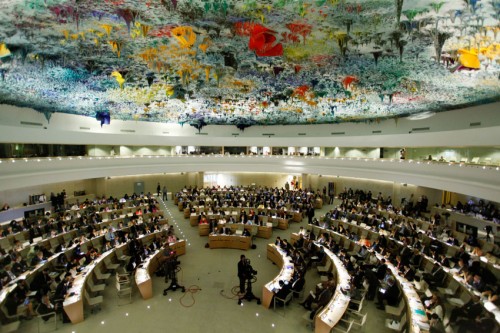 The head of the Arab League, Nabil El Araby, has asked the UN Security Council to expand the size of a UN mission in Syria and give it more powers to protect people following Houla massacre, Al Jazeera reports.

Nabil El Araby condemned the Houla massacre  blamed on Assad’s regime according to a letter leaked to media on Friday.

The Houla Massacre which the UN says has resulted in 108 dead people including 49 children has triggered widespread criticism and highlighted the failure of a UN backed ceasefire.

Meanwhile, the UN  Human Rights Council after a Special Session in Geneva on Friday afternoon, focused on the deteriorating human rights situation in Syria and the killings in Houla, it adopted a resolution – with 41 votes in favour, three against (Cuba, China, Russia) and two abstentions – condemning in the strongest terms the use of force against civilians and  has called for “a special inquiry” into the massacre in the Syrian village of Houla last weekend.

The meeting is the Council’s fourth special session on Syria since the crisis in the Middle Eastern country began some 15 months ago. The UN estimates that more than 9,000 people, mostly civilians, have been killed in Syria and tens of thousands displaced since the uprising against President Bashar al-Assad began.

The resolution was put forward by Qatar, Turkey and the US amid international outrage at the killing of 108 people, nearly half of them children, in Houla a week ago, Al Jazeera writes.

The 193-nation UN General Assembly is preparing to meet next Thursday to discuss the escalating crisis in Syria and the Houla massacre.

Syria’s delegation at the Human Rights Council has blamed “terrorists- armed gangs” of carrying out the killings It said its own investigation was under way.