Syria at risk of sliding further into chaos, Security Council was told 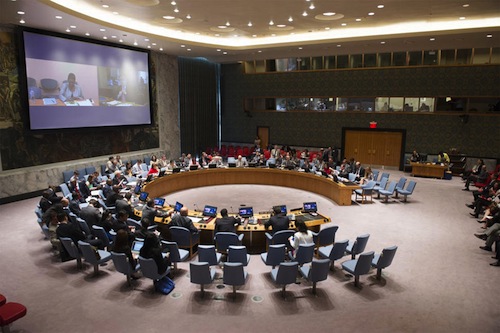 With war-ravaged Syria at risk of sliding deeper into fragmentation and chaos as serious human rights violations and war crimes have become routine, senior United Nations officials urged the Security Council and the wider international community to “come together to put an end to the bloodshed.”

“We are not only watching the destruction of a country but also of its people,” the Under-Secretary-General for Humanitarian Affairs, Valerie Amos said in her briefing to the Council in New York. “This is a regional crisis not a crisis in Syria with regional consequences, requiring sustained and comprehensive engagement from the international community.”

With some 5,000 people being killed every month, all the officials expressed extreme concern about the deepening violence, grave human rights violations, worsening humanitarian situation and particularly, the massive refugee crisis spawned by the spiraling conflict in Syria, which Guterres said was escalating at such a frightening rate that it resembled the outflow resembled the Rwandan genocide of nearly 20 years ago.

The brutal violence has spread significantly in the past months and the speakers feared the violence could ignite the whole region if a political solution is not reached soon.

Amos said that while UN agencies continue to deliver assistance, gaps in the humanitarian response remain as access to many affected areas such as Homs and Aleppo is difficult due to security concerns or Government restrictions.

“While we know where those considered most vulnerable are located, humanitarian organizations are still not able to get regular, consistent and unimpeded access to millions of affected people,” she said, adding that the Government has also imposed bureaucratic procedures which have impeded humanitarian workers to access affected areas.

“Some locations remain inaccessible due to active fighting or insecurity. However, there are other areas, sometimes only a few kilometres away from our offices – including in Damascus and Homs – where we are not granted authorization to enter.”

Amos noted that the situation inside the country has worsened, with reports indications an “open and blatant violation of the rules of war, with total disregard for human life and dignity, in a climate of generalized impunity.” Recalling that senior United Nations officials had repeatedly called for a political solution, she said: “We are looking to this Council to exercise a leadership role in that regard.”

In remarks delivered by Imonović, High Commissioner for Human Rights Navi Pillay echoed Amos’ statement, saying rights violations continue to be perpetrated by both Government and opposition forces. “In Syria today, serious human rights violations, war crimes and crimes against humanity are the rule,” he declared.

“Government forces carry on with indiscriminate and disproportionate shelling and aerial bombardments, using among other weapons tactical ballistic missiles, cluster and thermobaric bombs, all causing extensive damage and casualties if used in densely populated areas.”

He added that “armed opposition groups have also committed acts of torture, abduction and kidnapping, sometimes along sectarian lines.”

Both Amos and Imonović said they were concerned of the rhetoric used by leaders in the region exacerbating sectarian tensions, stressing this increases the risk of sectarian massacres, and urging States to take action to prevent incitement of violence on any grounds.

Imonović underlined that the continuous influx of foreign fighters into Syria to support both sides is endangering the whole region and called on the supply of weapons to both sides to stop. “The solution should be political, not military. States with influence over the parties must work to support an inclusive, Syrian-led political solution to this conflict,” he emphasized.

For his part, Guterres warned that if a political solution is not reached soon “the Syria conflict could ignite the whole region.” In particular, he stressed the heavy burden being borne by countries that are hosting thousands of Syrian refugees, pointing out that this is having a destabilizing influence and could potentially send them over the edge if they do not receive enough support.

Lebanon and Jordan are currently the two most affected countries, hosting over one million refugees between the two.

“Measures must be taken now to mitigate the enormous risks of spill-over and to support the stability of Syria’s neighbours, so as to keep the situation from escalating into a political, security and humanitarian crisis that would move far beyond the international capacity to respond,” he said.

Guterres appealed to international financial institutions, UN organizations and national and regional development agencies to cooperate with the host countries in formulating and supporting community development programmes that will assist these states to cope with the impact of the crisis in Syria.