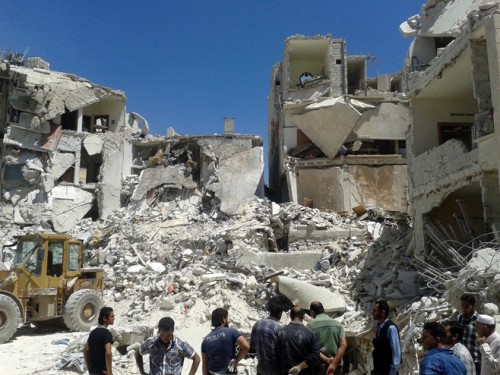 Ballistic missiles fired by the Syrian military are hitting populated areas, causing large numbers of civilian deaths, including many children.

The most recent attack Human Rights Watch investigated, in Aleppo governorate on July 26, 2013, killed at least 33 civilians, including 17 children.

Human Rights Watch has investigated nine apparent ballistic missile attacks on populated areas that killed at least 215 people that local residents identified as civilians, including 100 children, between February and July.

It visited seven of the sites. There were no apparent military targets in the vicinity of seven of the nine attacks investigated by Human Rights Watch.

In two cases there were nearby military objectives that may have been the government force’s intended targets, but were not struck in either attack.

“You cannot distinguish between civilians and fighters when you fire ballistic missiles which have a wide-area effect into populated residentialareas,” said Ole Solvang, senior emergencies researcher at Human Rights Watch.

“Even if there are fighters in the area, you cannot accurately target them and the impact in some of these cases has been devastating to local civilians.”

When used in populated areas, ballistic missiles with large payloads of high-explosives have a wide-area destructive effect, and it will not be possible when using them so to distinguish adequately between civilians and fighters, which almost inevitably leads to civilian casualties.

Military commanders, as a matter of policy, should not order the use of ballistic missiles in areas populated by civilians, Human Rights Watch said. It is difficult to draw final conclusions about the legality of an individual attack without knowing the motivation or the information available to the attacking party.

The repeated use of these high explosive weapons with wide-area effects in areas populated by civilians strongly suggests that the military willfully used methods of warfare incapable of distinguishing between civilians and combatants, a serious violation of international humanitarian law.

While using ballistic missiles in an armed conflict is not prohibited, their use is subject to the laws of war. A warring party is obliged to use means and methods capable of distinguishing between civilians and combatants, an attack should not cause disproportionate damage to civilian lives and property, and the party using the weapons should take all feasible precautions to minimize civilian harm.

According to the Syrian Network for Human Rights (SNHR), a Syrian human rights group, the government used at least 131 long range surface-to-surface missiles between December 2012 and early July.

Twenty of the attacks, some using multiple missiles, killed approximately 260 civilians, the group said. Human Rights Watch has not independently verified these attacks.

Syria stockpiles several types of ballistic missiles, according to the authoritative publication Military Balance 2011 by the International Institute of Strategic Studies. They include Scud missiles, variants of Scud missiles, SS-21 Tochka missiles, and Luna-M missiles.