Posted on: November 7th, 2012 by Romana Turina No Comments 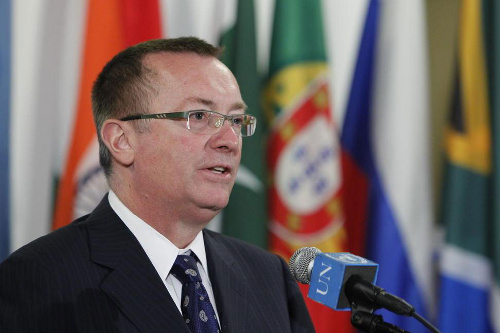 UN Under-Secretary-General for Political Affairs, Jeffrey Feltman, told reporters at UN Headquarters in New York that Syria’s current path of violence will lead the country “to its destruction,” and there is an urgent need to move towards a political solution.

“It has to be a Syrian-led process; it can’t be imposed,” Mr. Feltman told reporters after he briefed a closed meeting of the UN Security Council on the situation in the war-torn Middle Eastern country.

Mr. Feltman also said that the Joint Special Representative of the United Nations and the League of Arab States for the crisis in Syria, Lakhdar Brahimi, was working with “great urgency.”

Syria has been wrecked by violence, with at least 20,000 civilians killed since the uprising against President Bashar al-Assad, some 20 months ago. The violence has produced more than 380,000 refugees, and more than 2.5 million people are in need of humanitarian assistance, according to UN estimates.

As part of his efforts to halt the violence in Syria, Mr. Brahimi has had a range of meetings on the matter, both regional and elsewhere. Earlier this week, in Cairo, he met with Russia’s Foreign Minister, Sergey Lavrov, and the Secretary-General of the League of Arab States, Nabil El-Araby. Last week, he held meetings in Moscow and Beijing.

“Political efforts are going on with great urgency,” Mr. Feltman said. “The situation inside Syria is turning grimmer every day,” he told reporters, adding there was a growing risk the crisis could “explode outward into an already volatile region.”

Syria-related violence has occurred in Turkey and Lebanon, and what Mr. Feltman called “activities” have been present in Golan, an area sandwiched between Syria and Israel, where the peacekeeping mission known as the UN Disengagement Observer Force (UNDOF) monitors the 1974 disengagement agreement keeping Israeli and Syrian forces apart.

“We don’t think the fighting is directed at undermining the disengagement of forces agreement per se,” Mr. Feltman said in response to a question on the situation in Golan. “It is the Syrian-on-Syrian fighting.”

Mr. Feltman noted how Joint Special Representative Brahimi saw a June communiqué by the UN-backed Action Group on Syria as still providing an “important building block” for an eventual peace.

At a meeting in Geneva in June, the Group had agreed on a set of principles and guidelines for a Syrian-led transition that meets the aspirations of the Syrian people. Among other proposed measures, the meeting called on all parties to immediately re-commit to a cessation of armed violence, in addition to the establishment of a transitional governing body that would exercise full executive powers and would be made up of members of the present Government and the opposition and other groups.