Syria: ‘no conclusive findings’ on use of chemical weapons 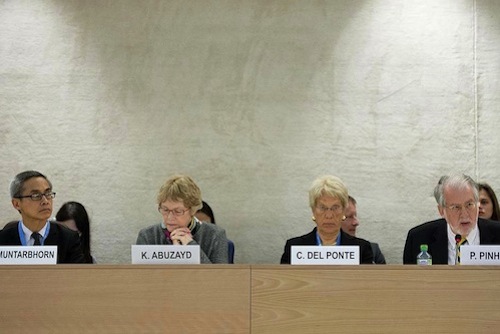 With its investigation continuing into violations of human rights in Syria, an independent United Nations panel today said it has “no conclusive findings” regarding the use of chemical weapons by any of the parties to the conflict in the country.

In a statement, the International Commission of Inquiry on Syria said it wished to clarify that is has not reached any final findings on the use of chemical weapons and “as a result, the Commission is not in a position to further comment on the allegations at this time.”

The Commission, which was created in August 2011, comprises Mr. Paulo Sergio Pinheiro, Karen AbuZayd, Carla del Ponte and Vitit Muntarbhorn. It has been mandated by the Geneva-based Human Rights Council to investigate and record all violations of international human rights law during the conflict in Syria.

Mr. Pinheiro, Chairperson of the Commission, reminded all parties to the conflict that “the use of chemical weapons is prohibited in all circumstances under customary international humanitarian law.”

The Commission is scheduled to issue its findings to the Council on 3 June.

Meanwhile, Secretary-General Ban Ki-moon renewed his appeal last week for unfettered access to Syria for a separate United Nations team focused specifically on probing the alleged use of chemical weapons during the conflict.

That fact-finding team, headed by Swedish scientist Åke Sellström, was launched in late March following a formal request from the Syrian Government. However, it has been on stand-by for a month, pending authorized access from Syrian authorities. Mr. Sellström, according to the Secretary-General’s Spokesman, continues consultations with all the parties, including all concerned Governments, to pursue his investigation.

More than 70,000 people, mostly civilians, have been killed, and some 3 million displaced since the uprising against President Bashar al-Assad began in March 2011.